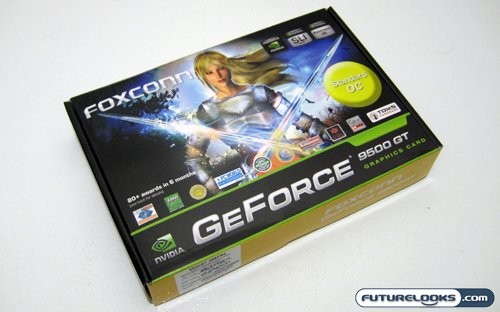 Positioned slightly below the GeForce 9600GT, the GeForce 9500GT represents NVIDIA’s contribution to the mainstream and budget market in the current generation of chipsets. As noted above, this means that these cards tend to be found in systems where heavy duty graphics performance may not be needed or expected. That doesn’t mean these cards are any slouch in performance, as they are still better then most onboard and integrated video solutions. I just wouldn’t expect any miracles when placed up against higher end video cards. Luckily the average price on these cards does reflect any performance short comings. They are typically priced between $20 and $50 USD cheaper than a 9600 GT based card. 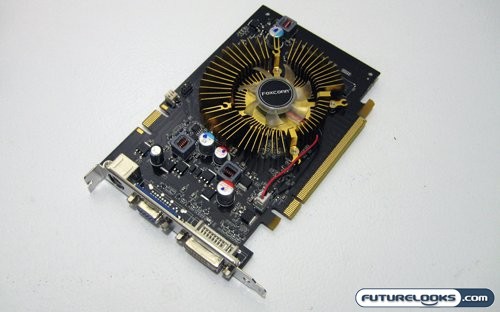 As for our review unit, it was kindly provided by FOXCONN. The 9500GT-256FR3 OC video card, as it’s name would imply, is factory overclocked and includes 256MB of GDDR3 RAM. The card also sports HDCP compliance, and supports DX10 Shader Model 4.0. For more info and specifications, check out the product home page. As for the card itself, the Foxconn 9500GT-256FR3 OC harkens back to the day when you could actually see most of the PCB of your video card. All joking aside, this video card is a fairly simple affair. There’s a large, actively cooled heatsink mounted to the GPU, and the memory sitting out in the open. 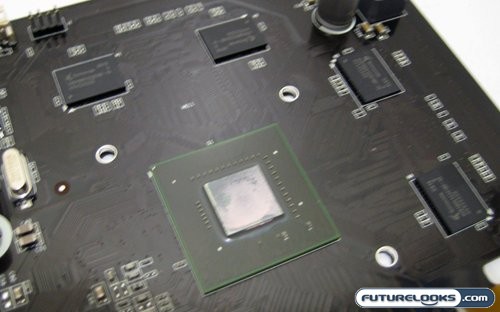 The heatsink is easily removed by simply undoing four screws from the rear of the card, should you want to install an aftermarket cooler. We just wanted to take a peak under the hood, as it were. One thing that is interesting is that this 9500GT card is based on the new G96 core, which is fabricated on a 55nm process. That would explain the remarkably small GPU package. 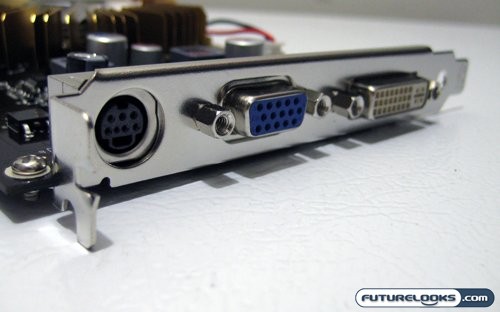 To connect a display to the Foxconn 9500GT card, you are provided with a selection of ports that are typical for this class of card. From right to left you have a DVI port, VGA port, and the HD output. It’s kind of strange to see a VGA port these days, even on budget-minded cards. Many cards, even those in this price range, have changed over to dual DVI to better support those who need large displays without concern for 3D performance. Another adaptor that is missing, though unsurprisingly, is the secondary power adapter. The 9500GT and the cards based on it do typically need any more power then what is provided from the PCI slot. 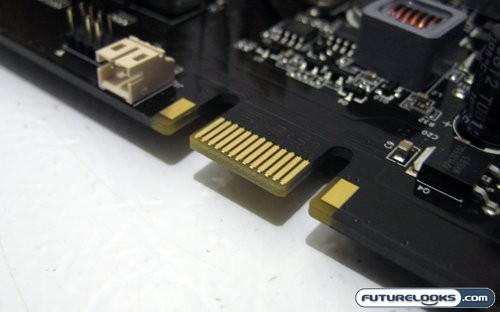 If you are still so inclined, you can run the 9500GT in SLI. It only does support dual-card SLI, but if you want a performance boost down the road the option is open. Due to the size of this card everything is pretty well compacted together, and right next to the SLI connector is the S/PDIF plug. This is for a feed from your sound card, so you can pass audio through the HDMI port when connected to an HDTV.