What Else is in The Box? 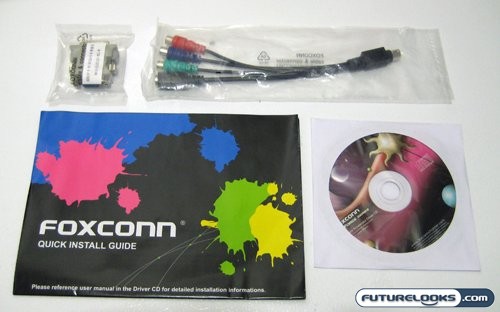 The accessories included with the Foxconn 9500GT-256FR3 OC video card are pretty well the bare minimum expected to come with a video card. That isn’t a bad thing, as this card seems aimed at providing the least expensive dedicated video card. There’s a DVI-to-VGA adapter and video output cable included. The CD contains drivers and Foxconn’s own tweaking software, and the user manual is fairly thin and covers the basics of installation and setup.

To test the Foxconn 9500GT-256FR3 OC video card, I installed it into my current test rig. I installed the latest NVIDIA drivers available to run this card. The components for my test rig go something like this.

The choice of an x64 version of Vista for testing is necessitated by the use of 4GB of RAM in our test rig. As for video cards to compare the 9500 GT against, I figured it would be cruel to put in up against the GTX 260 and GTX 280 we reviewed, so I pitted it against the other 9000 series NVIDIA cards we’ve reviewed. If you want to cross reference the results to see where the 9500GT sits in the grand scheme, check out the various video card reviews we’ve done.

Our first test is the truly old 3DMark06. This long used and oft-never-forgotten synthetic benchmark tests DirectX 9 performance. Our tests have always been ran at 1680×1050, with all other settings left to default. Even at that, the Foxconn 9500GT posted a result that was 47% slower then the 9600GT card. This isn’t that surprising, as the 9500GT is, in almost every spec, essentially half of its bigger brother. It has half the stream processors, less then half of the fillrate, half the RAM, and so on.

3DMark Vantage is a full replacement for 3DMark06, sporting the latest DirectX 10 features and tests. Since the 9500GT is a DX10 compatible card, it has to be thrown into the ring and ravaged by this much harsher benchmark. I thought for sure 3DMark Vantage would do in the 9500GT, but the trend of half performance continued. The score posted by the 9500GT is almost 50% of the score of the 9600GT we used. This does show some promise, though this is only the “Performance” score, and is only run at 1280×1024.

I did try running this card through the “High” test in 3DMark Vantage, but it just couldn’t do it. It crashed twice on me. That’s understandable as the “High” test ramps the resolution up to 1680×1050, and kicks the detail settings up a notch or two. So with those results, it’s time to turn things over to our real world tests.