Computers are forever changing, but at the same time, they can be quite the expense to keep up. It’s not always viable to spend money on the more significant components such as a new Motherboard, RAM, Video Card, or perhaps switch from a mechanical hard drive to a solid-state drive.  Do not worry, as there are other parts of a computer that you can upgrade, such as the case or chassis, CPU cooling to even the power supply. Perhaps your current machine is a bit boring and sitting in a typical black case tucked under your desk somewhere? Today’s trend is to show off your computer and its components, put the desktop back on the term desktop.

With the help of SilverStone, we take a look at breathing new life into an older computer. In this review, we will take a look at 3 of the many products that SilverStone offers; a Primera Series case the PM02, a CPU cooler from their Argon Series the AR07 and a 700W Power Supply Unit (PSU) from their Strider series the ST70F-TI.

Now for a little bit of background. It has been a while since I’ve taken a computer entirely apart and put together back together, and I honestly miss doing it. I wanted to take a machine that was sitting on the floor doing nothing and make it look new and more exciting than it used to be. I also wanted to see how well I could create a somewhat clean install. Before the SilverStone PM02, my cases have not had easy ways to route cables and make them look neat. For those wondering, the specifications of the computer I am rebuilding are the following: 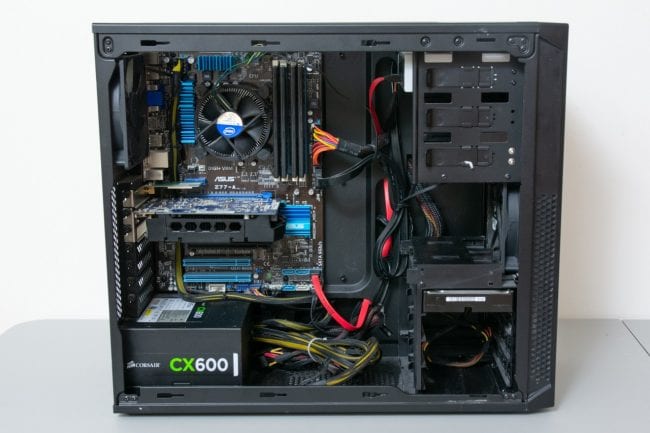 Isn’t this the beauty of a computer? It was a pre-built machine that my older sister purchased a few years ago that I purchased from her as it was an upgrade from what I was previously using. If you noticed in my above specs, I mentioned an EVGA GTX 1050 Ti, but in the image, if you look closely that is not the GTX; it’s a Sapphire Radeon 7700 HD. The Corsair CX600 is not modular, and so there are a lot of extra power supply cables. The cables are haphazardly zap-strapped to various parts of the case. I have seen messier internals *cough*Dell*cough*, but overall, it is not too bad, but it doesn’t bring out any interest if this were to sit on a desktop in full view.