Most of you probably think that we run around with the latest Intel Core i9 or AMD Ryzen Threadripper systems. But you’d be totally wrong. One of the systems that we rely on day to day for all the important lifting in our video production work flow is actually an Intel X58 system running a Core i7 980X Extreme CPU. This system was put into service in 2007 and has been our go to system for nearly 10 years.  But it was only recently when we started adding 4K footage into our videos that things started to slow down a bit. But that didn’t stop us from trying to keep it alive with today’s latest components including an NVIDIA GTX 1080!

The Intel X58 platform was one of the most robust that the company ever launched. With its LGA1366 socket and support for up to hexacore processors, it was a top dog for a very long time. Even today, it can handle most tasks easily. That included our HD video workflow. However, the 4K video footage coming in from our Sony A7SII camera started to prove bothersome. So that’s when we decided to update it’s NVIDIA GTX 780 Ti to the latest GTX 1080 GPU!

Check out the details of this transformation by clicking the play button at the top of the page for our latest Vlog #2!

Intel X58 System Won’t Die. And We’re OK With That. 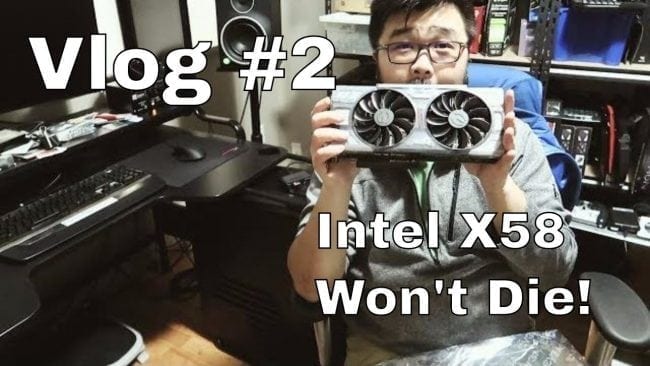 The NVIDIA GTX 1080 definitely gave our faithful Intel X58 system another lease on life. And as long as it continues to cut through the footage at a reasonable pace, we probably won’t be switching up until the dust finally settles between the latest battle between AMD’s Ryzen and Intel’s Core i9.

Are you still rocking an old school system and don’t have plans to replace it? Let us know in the comments below!