In the unending war between the two major GPU manufacturers, ATI/AMD and nVIDIA, you’ll find an array of light, medium, and heavy artillery dotting the battlefield. However in this current salvo, the guys in green have only brought the big and mid-size guns to the party. I’m of course talking about the GeForce GTX 280 and GeForce GTX 260, respectively. 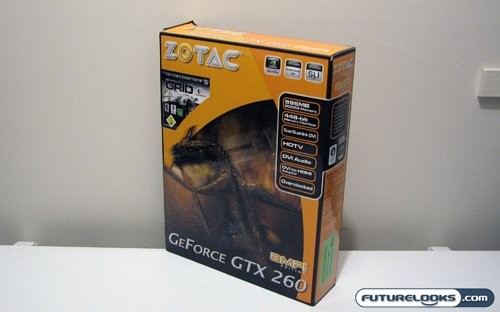 We’ve already reviewed the high performance chipset, the GTX 280, so it’s time to take a look at the middle of the road. The NVIDIA GeForce GTX 260 was released concurrently the GeForce GTX 280 as a mid-range version of that card. This pair of cards were released just 3 months after the GeForce 9 series, which caused a few eye brows to be raised. Some wondered if this was actually a new card, or another revamp of an old chipset. Thankfully that simply isn’t the case. 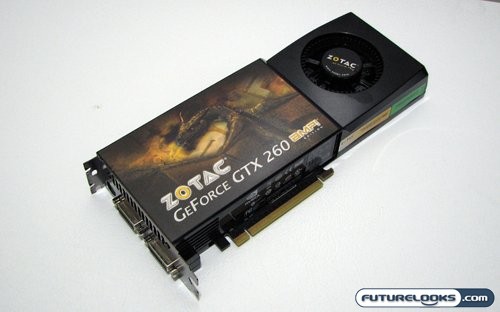 Though based on the same unified architecture, the GeForce GTX 2xx series cards use an all new NVIDIA chipset. Codenamed D10U-20 and D10U-30 for the GTX 260 and GTX 280 respectively, this chipset is bigger and more complex then the chipsets seen in the GeForce 9 series. It consists of 1.4 billion transistors covering a 575 mm² die surface area and is built on a 65 nm process. To date, this is the largest CMOS-logic chip that has been fabricated at the TSMC foundry. Luckily the cards themselves aren’t any bigger than previous generation top end cards.

The card that we’re looking at today is a factory overclocked GTX 260 from the folks at ZOTAC and goes by the name GeForce GTX 260 AMP! Edition. ZOTAC managed to push the GPU in this card to 640MHz and the memory to 1400MHz, which is a fair jump up from the stock GPU and Memory speed of 575MHz and 1000MHz respectively. This was able to be stuffed into a package that doesn’t deviate from the NVIDIA reference design for this card. A full run down of the specifications can be found on the product home page. As for pricing, ZOTAC’s pre-overclocked card goes for about $30 to $50 more then the street price of a standard GTX 260. 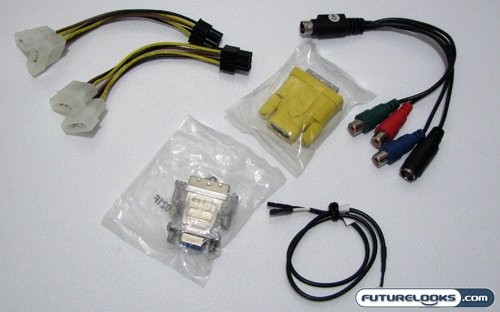 Since the ZOTAC GTX 260 card is so similar to the previously reviewed ZOTAC GTX 280, it should come as little surprise that the accesories packaged with it are of equal similarity. With this card ZOTAC has included all the need accessories. For cables, they’ve included two power adapters to convert two 4-pin Molex connectors into one 6-pin PCIe connector. They’ve also included a VGA-to-DVI adapter, and the standard cable for component and S-video outputs. An added bonus that has been seen more frequently in video card packages is the DVI-to-HDMI convertor, which makes sense with the prevalence of HD equipment in the home. To further augment that adapter, an SPDIF cable is included so you can use the audio channel on the HDMI connection.

So I’ve talked about the similarities between the ZOTAC GeForce GTX 260 AMP! Edition and it’s GTX 280 bigger brother. I’m left wondering, as I’m sure you are, where the differences lie. This card is overclocked from the factory, so it’ll be interesting to see how much of a performance difference that makes.