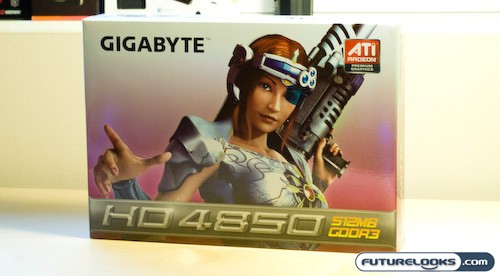 It’s hard to justify spending over $500 just to get a single game like Crysis to run. However, that’s just what we’ve been doing over the last while as NVIDIA pretty much had the run of the market place, pushing out GPUs at unheard of price points, punishing gamers and their wallets. Then things changed in June this year as AMD released a new series of GPUs starting with their 4850. NVIDIA’s response? Cut prices like crazy and hope that people would ignore AMD. However, as benchmarks and reviews started showing up, it was clear that NVIDIA had more to worry about than just price points.

As one of the launch partners, GIGABYTE was one of the first to embrace AMD’s new GPU product. Except for the obligatory cool artwork of an Anime Princess on the box and a sticker on the cooler, their 4850 based product known as the GV-R485-512H-B is a 100% clone of the AMD reference design. There’s nothing wrong with this as the reference design is actually very good, utitlizing a single slot fan which makes it possible to save some space for other add in cards. What GIGABYTE has done though, at least in this neck of the woods, is ensure adequate supply of these GPU’s at extremely competitive prices (with rebates), to get them into the hands of gamers and we’ve got one in our hands. Let’s check it out and see what’s got NVIDIA all hot and bothered. 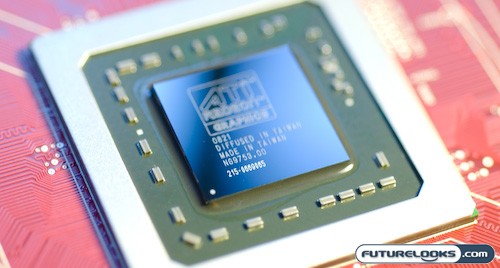 In a nutshell, the 4850 GPU core is a highly tweaked version of last year’s RV670 core, now called the RV770. This new core features upgrades over last year’s product which includes an increase from 320 stream processors to a whopping 800. The new core also features a jump from 666 million transistors to over 956 million, on the same 55nm production process and also supports all the way up to GDDR5 memory on the 4870. For more specifications on the 48xx series core, you can check out the AMD Spec Page. 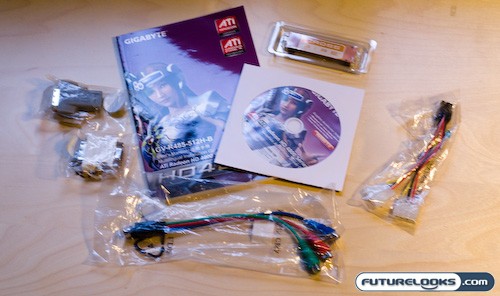 In order to keep the price down, GIGABYTE has gone with just the basics in the box which include a DVI to VGA dongle, DVI to HDMI dongle, Component and Composite video output adapter, MOLEX to PCI-E adapter and a CrossFire bridge. A basic manual and driver CD are also included. There are no games or extra stuff in the box.

Although having the bare minimums in the box to keep the price down isn’t a bad thing, this does make things harder for GIGABYTE. Not only do they have to compete on price, but they have to ensure that retailers always have these in stock as pretty much any brand of HD 4850 is a substitute. In a sense, this is good for you and me because we’ll always be able to find one somewhere and because there are so many substitutes, prices should be fairly aggressive.