It’s that time again; time for one of the two remaining video card manufacturers to reveal what they’ve been cooking up since their last product release. Today we’re seeing green, and testing the new nVidia GeForce 9800 GTX video card. This is being done by way of a board from Foxconn. 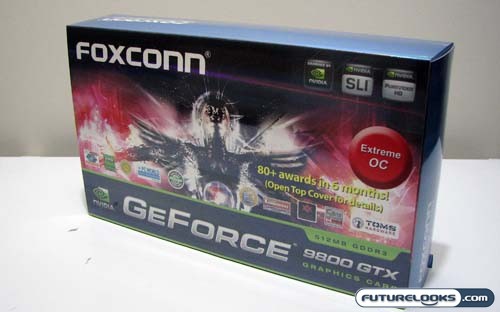 The nVidia GeForce 9800 GTX is the newest mid-range 9800 series chip from nVidia. That’s right, I said mid-range. Whereas in previous generations the GTX moniker belonged to the highest performing nVidia board at release, this time around it’s been applied to the mid-range silicon. It’s true that the previous generation GTX would get an Ultra refresh, but that didn’t happen for several months after the initial launch of the chip. If you’re wondering, the highest of the high end nVidia cards is the GeForce 9800 GX2, which is simply two 9800 GTX GPUs on the same board. This should make the Ultra refresh cycle rather interesting.

Though not as well known in the North American market as some other manufacturers, Foxconn has been making motherboards and video cards for that market for quite a while now. Their latest effort in the Foxconn 9800GTX-512N Extreme OC shows that aren’t going anywhere, and are poised to further their presence in our neck of the woods. 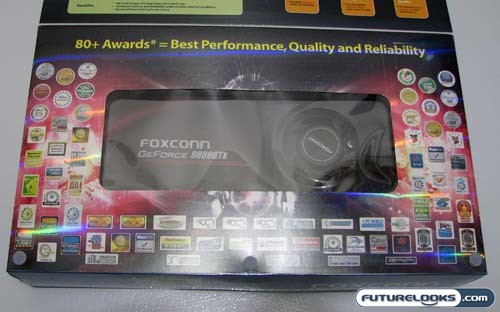 This new card is the top dog in Foxconn’s line of 9800 GTX cards. They basically took the nVidia reference design, and pushed it a little further than spec. Their tweaking resulted in a boost to 780MHz core speed, and 2360MHz effective memory speed. Here’s a quick run down of the rest of the specs. A full ream of info can be found on Foxconn’s product page. 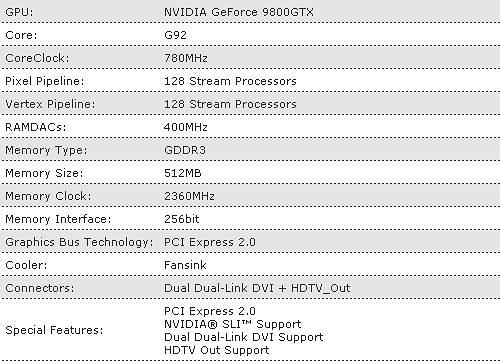 Now the base price for a 9800 GTX card is $299 USD. On the street the extra boost of speed garnered from Foxconn’s tweaks will cost an additional $30 – $50 depending on the vendor. With that price, you get a factory overclocked unit that is covered under warranty for three years.

It should be noted that according to nVidia’s specifications, the 9800 GTX is stock clocked at 675MHz on the core, and 2200MHz effective on the memory. This means that Foxconn’s board is overclocked a respectable 13% on the core, and a minor 7% on the memory. Luckily this overclock is covered under the warranty, and should you try to push things anything further you are on your own. That being said, I’m curious to see how much of a boost you are given over the previous GTX edition card. Let’s open this up.