Yes, believe it or not, that is a fully functional computer there. It may have once been the case (no pun intended… okay, terrible pun intended) that practically all PCs came in your choice of a generic beige rectangle or a generic black rectangle if you’re feeling rather special. Those days have changed and you don’t need to stick with what comes out of the box (another bad pun intended) either. The folks at GIGABYTE invited some of the world’s most famous case modders over to Computex earlier this month to showcase their talents and creations.

I know. It looks more like something you’d find in a sci-fi movie, especially since you don’t really see the standard “box” that you’ve come to expect from desktop towers. There’s some sort of alien-like exoskeleton, a custom paint job and all sorts of fancy doo-dahs going on. From what I can gather, that’s a liquid cooling setup that is almost functional in design. 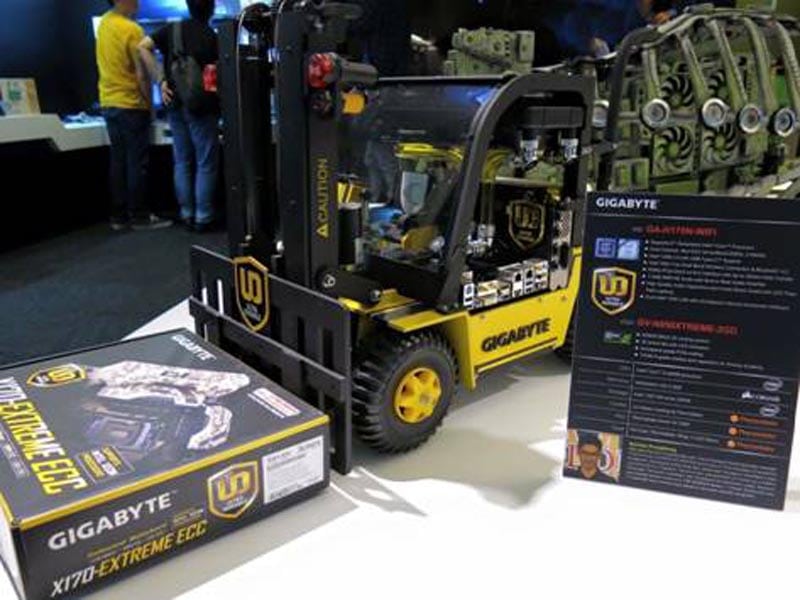 Another great example from the community of case modders is this open air concept. They’ve taken a case and transformed it into an actual working forklift, complete with moving parts.

GIGABYTE is particularly proud of its own in-house case modders, who put together the Ghostbusters-themed creation shown below. Benny Shieh and Janus Yeh took the retail Lego Ghostbusters firehall set and turned it into a computer. They routed LEDs, factory lights and more. And the GIGABYTE motherboard? It’s mounted using LEGO bricks too.

The full press release has been included below, should you so desire to read it. The next time you look at your generic black or beige rectangle, maybe you should take a page out of these case modders and start to think outside the box too.

City of Industry, California, June 17 2016, – GIGABYTE TECHNOLOGY Co. Ltd., a leading manufacturer of motherboards and graphics cards, had the pleasure of hosting some of the world’s top case modders, including one project done by GIGABYTE’s very own staff, at its suite in Taipei 101 during Computex 2016 – which wrapped up in early June.

Case modding has grown in popularity over the past years. While it was once something that only die-hard enthusiasts had interests in, now many case modders sell their creations allowing anyone to own a customized PC case. This allows users to add another layer of personality to their PC, which simply would not be possible with a stock case from a major chassis manufacturer. These modders go all out to add additional flair by incorporating components like sensors, actuators, and motors so parts of the case or even the entire mod has the ability to move, similar to the mod GIGABYTE displayed from, Suchao Prowphonga, case modder from Thailand.

While there were many innovative and creative case mods on display at GIGABYTE’s Computex 2016 suite, the highlight was no doubt the Ghostbusters themed casemod built by GIGABYTE’s very own Benny Shieh and Janus Yeh.

This case mod was built with a retail Lego® Ghostbuster’s Fire hall set, with no stone left unturned the GIGABYTE team displayed their attention to detail by routing power to all the flood lamps and factory lights inside and outside the chassis and retrofitting each with LEDs, coating some to have a yellow tint. To demonstrate their creativity the GIGABYTE Modders mounted and attached the motherboard and all the other components solely through the use of Lego bricks alone showing users that they can leverage all the parts and blocks Lego® has.

“Having all these case mods on display at the GIGABYTE Suite in 101 is extremely exciting for GIGABYTE, we value our products as masterpieces and now we can show that we are not the only ones that believe this,” said Henry Kao, Vice President of GIGABYTE Motherboard Business Unit. “Many artists have incorporated our motherboards into their works of art making it part of their masterpiece for the world to see.”

To further spark the interest as well as stimulate the case modding community GIGABYTE has made a tutorial video as well as a behind the scenes look at how this case mod was made, this video is available on GIGABYTE’s Motherboards and BRIX YouTube channel for all to see.

Every year GIGABYTE invites the world’s best case modders to display their work at the GIGABYTE suite. Next year it could be you! To apply, send a picture portfolio and brief write-up describing your design to your local GIGABYTE office.

GIGABYTE, headquartered in Taipei, Taiwan, is known as a global leading brand in the IT industry, with employees and business channels in almost every country. Founded in 1986, GIGABYTE started as a research and development team and has since taken the lead in the world’s motherboard and graphics card markets. On top of Motherboards and Graphics cards, GIGABYTE further expanded its product portfolio to include PC Components, PC Peripherals, Laptops, Desktop PCs, Network Communications, Servers and Mobile Phones to serve each facet of the digital life in the home and office. Everyday GIGABYTE aims to “Upgrade Your Life” with innovative technology, exceptional quality, and unmatched customer service. Visit http://www.gigabyte.us for more information.