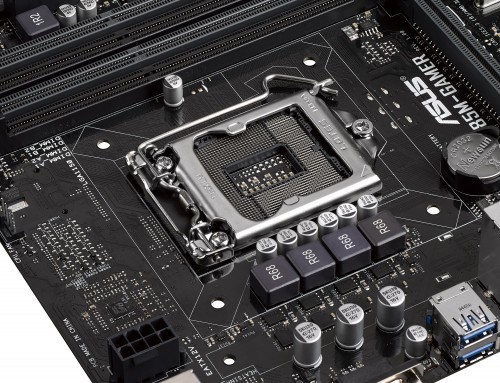 Although PC Gaming is definitely where it’s at, the cost to get into the game, can sometimes be cost prohibitive. That’s why we’re pleased to see ASUS bringing gaming features and a bit of their ROG styling down the line to an entry level board called the ASUS B85M-Gamer.

In order to push costs down, the ASUS B85M-Gamer is based on a business based chipset called the Intel B85 express. It sits somewhere between the H97 and H81 series chipets, but is made for a high level of stability in the markets that it typically services, which is usually 24/7 service in enterprise and business. You also get Intel Gigabit Ethernet with LANGuard, and SupremeFX gives it great gaming audio including a headphone amplifier up to 300 ohms. With the ELNA capacitors, it’s actually the same amplifier used in higher end ASUS ROG boards. It even comes with Gamer’s Guardian components, and power is kept stable with an ASUS Digi+ voltage-regulator module. This gives a little bit of headroom for tweaking using ASUS AI Suite 3, but not overclocking, as this is one way the B85 express chipset is able to keep costs down.

The board supports up to 32GB of DDR3 memory in four DIMM slots, and supports XMP profiles. It will also give you access to the entire range of Intel LGA1150 CPUs from Core i3 all the way up to Core i7. 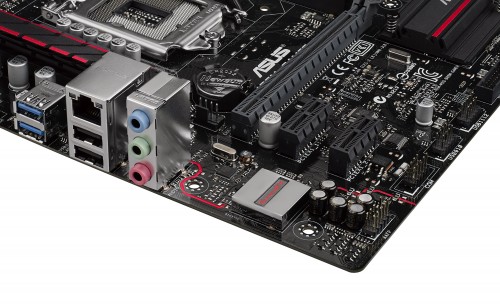 In terms of connectivity, you’ll find four SATA III/two SATA II ports, and a PCI-Express graphics slot. There’s also four USB 3.0/six USB 2.0, and HDMI/VGA, for onboard graphics support. PS2 keyboard and mouse ports round out the package. All of this is tucked onto an mATX form factor.

The ASUS B85M-GAMER looks like it is aimed at internet gaming cafes in the Asia markets, where systems do indeed get run 24/7, and where PS2 and VGA is still in use. Since the announcement was pulled from the international ROG site, it’s uncertain if this will make it to North America. But if the price is right, and the demand is strong, we might start to see this and other super affordable gaming boards in the very near future.