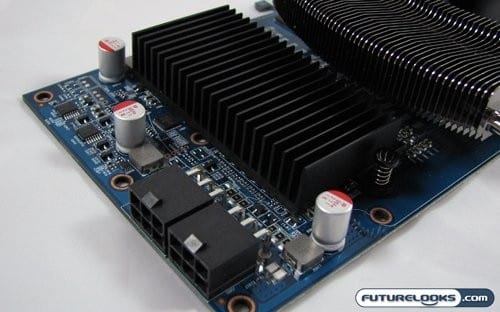 Like any other Radeon HD 4890, the R489OC uses two 6-pin PCIe connectors for extra power. The card is also the same length as a standard HD 4890, and that combined with the length of this card may cause some problems for those with smaller cases, or cases with a unique configuration.

Power stability is handled by the use of solid state Japanese capacitors. Even without any extra RAM cooling, this should give us a helping hand when we do try to overclock this card. It definitely won’t be the weakest link in the chain. 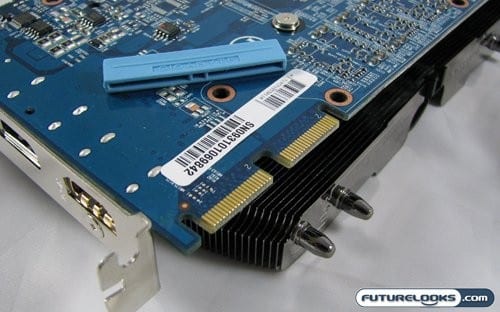 If you aren’t interested in overclocking and really just want the quietest performance rig you can manage, the R489OC supports CrossfireX like any other 4890. You can hook this card up in a dual or triple configuration without issue, and things should remain fairly quiet under even the most strenuous of gaming sessions. Bear in mind that the cooler still makes the card a dual slot solution, and you’ll need to plan placement of your expansion cards accordingly.

Testing the GIGABYTE GV-R489OC-1GD Radeon HD 4890 video card consisted of installing it into my current test rig, and running a series of gaming and 3D performance based benchmarks to see how it faires. The latest current drivers from ATI were used in all tests, and the card was pitted against its vanilla Radeon HD 4890 card brother that we reviewed a while back.

Here are the rest of the test rig specs:

As for actual benchmarks we pretty well focused on gaming, trying to pick the most punishing titles in a particular genre. We brought back 3DMark06 for this review, since there are still some very popular DirectX 9 based titles hanging around.

Why am I leading off with overclocking? The answer is quite simple actually. The impetus of this video card, other then it affection for silence, is that it’s factory overclocked and cooled using a 3rd party cooler. So we should be able to push a little further, right? Not so much.

The R498OC is already running at a core speed of 900MHz, which is 50MHz higher then stock, or 6% depending on how you do the maths. The memory is bone stock, as I mentioned that in theory it can’t be run any higher due to spec and lack of any cooling. Turns out my theory was accurate.

Simply trying to use ATI’s auto-tune feature to find the best GPU and RAM speed resulted in a BSOD and reboot. Turning towards manual tweaking didn’t get me much either, as the core wouldn’t run stable at any higher speeds. Looks like quiet is this card’s only game. Still the factory overclock should get us some additional performance in our benchmarks.