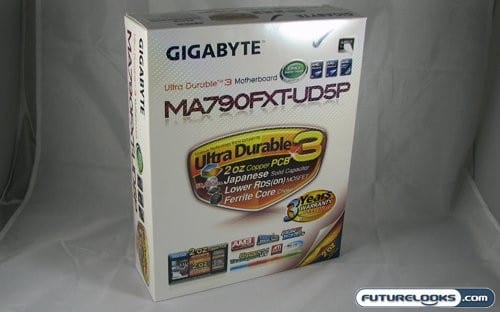 Hot on the heals of our recent AMD platform showdown, it was decided that we take a closer look at some of the individual components that make up these systems. We’ve already gone over the Asus M3A78-T, which represents the transition from socket AM2+ to socket AM3, and came away impressed with the value proposition of being able to hang on to that DDR2 memory just a little bit longer. Now it’s time to look at a fully featured AM3 only motherboard from GIGABYTE, and see how it stacks up to against the competition. 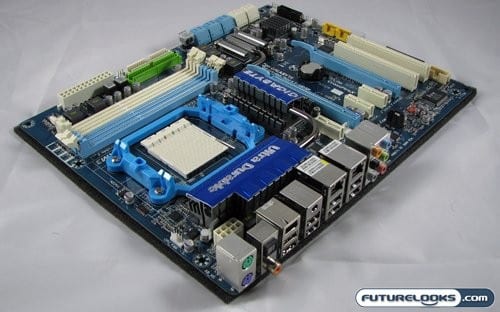 The GIGABYTE GA-MA790FXT-UD5P AM3 790FX motherboard is, as a model number, just a little more than a mouthful to say without tripping over your own tongue. It’s also pretty well at the top end of the spectrum for AM3 based AMD motherboards, having pretty well every bell and whistle you’d expect. This includes such features as dual gigabit LAN controllers and support for DDR3-1666+ MHz memory. Also found on board are GIGABYTE exclusives, like Ultra Durable 3 technology with copper cooling, and DualBIOS system backup and restore. Since this is an AM3 only board, you’ll want to check out the features and CPU support list found on the product home page.

The price for this motherboard is just right, especially when compared to the price of entry for a motherboard that supports Intel’s Core i7 processor. Generally the MA790FXT board can be found for $180 USD, putting it in the same price range as other top end boards from MSI and DFI, and slightly cheaper than Asus. As I said in my AMD platform showdown, these low prices have AMD nipping at heels of Intel. Hopefully this board provides enough performance to accommodate that value. We’ll get to that, but first let’s take a closer look at what GIGABYTE considers a top end AMD board.

Before we get to the meat and potatoes of this motherboard, it’s a good idea to take a look at the fixings. That use of slang from the American south is rather appropriate, as GIGABYTE has included a large amount of accessories with their motherboard. 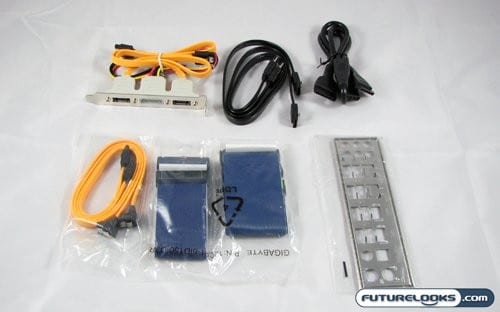 Though it doesn’t quite approach the trim level found in the Asus M3A32-MVP Deluxe motherboard package, GIGABYTE still does what some motherboard manufacturers still won’t do, and put in all the cables you’d need to put together a top end system. They’ve included 4 SATA cables, as well as an IDE and Floppy cable.

GIGABYTE has also included a nifty addition: an external eSATA bracket that hooks up to both power and an internal SATA power. This should allow you to hook up any bare hard drive and use it as a backup device. Noticeably (and strangely) absent is a USB or FireWire bracket. I’m guessing GIGABYTE just assumes you’ll use front mounted ports for the onboard headers, but the bracket would be a nice option. Still they manage to make for it with some added value, which we’ll look at further on.