While some would argue that 3DMark06 Pro is a little too antiquated to be used in testing of modern video cards, I would say it’s at least a good place to start when you need to test DirectX 9 performance. At the very least you get some really high numbers, and who doesn’t like high numbers? 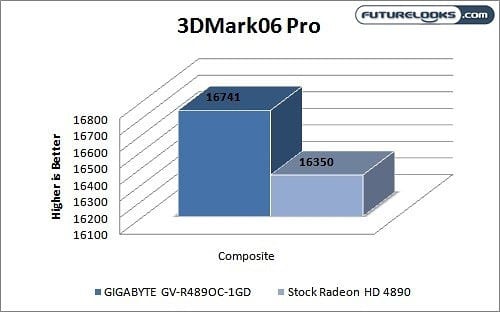 Ahem…anyhow, to test the GIGABYTE card we used the default settings for 3DMark06. This produced a 2% performance advantage for the GIGABYTE oc’d card compared to it’s stock cousin. 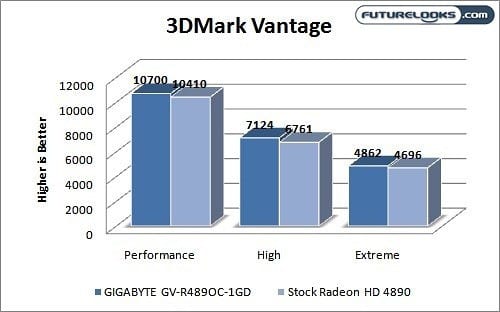 The performance delta in our 3DMark Vantage tests was a little wider, with between 3% and 5% being posted for each test. Though on the surface this doesn’t appear to scale well with the 6% overclock I mentioned on the GPU, you have to remember that memory is running at stock speeds and these numbers will be an aggregate of those two factors.

I think we need to turn to the real world to see what performance benefits this card might afford us.

Turning to some real world tests for the GIGABYTE GV-R489OC-1GD Radeon HD 4890 video card, we start off with Call of Duty 4. This this popular DX9 title has a sequel of sorts out, it uses the same engine. CoD4 still has a large audience of amateur and pro players. As for the game engine, it does have a fair degree of graphical complexity for a DX9 based engine. 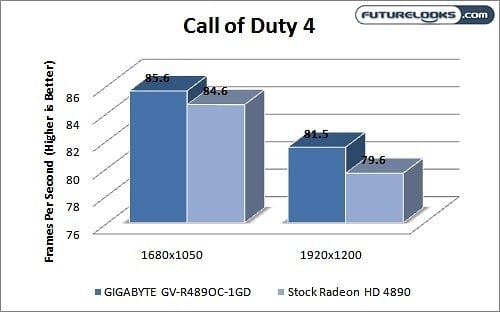 All our tests were performed with maximum settings at the two most frequently used wide screen LCD resolutions. Even with this difference, we didn’t see a see gap in performance until we moved to the higher 1920×1200 resolution. There we saw a jump in performance of 5% when moving to the newer GIGABYTE card.

I would have liked to keep going to higher resolutions, but sadly the native and max resolution is where the benchmark and game limits itself. 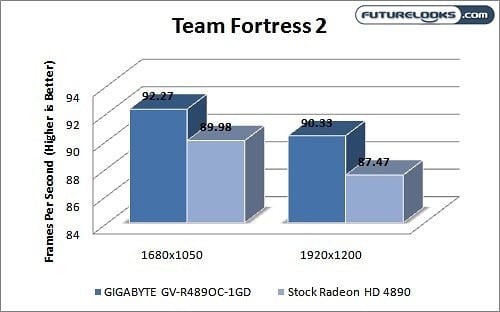 Team Fortress 2 is still one of my favourite Valve games, mostly due to it’s class-based team-oriented combat. I’m a sucker for such things. Now normally it wouldn’t make an appearance in our benchmark suite, but an upgrade to the L4D engine rendered our demo unusable. TF2 still does put stress on video cards, and we did once again see a small performance gap between the two cards that scales well with the difference is spec between the vanilla card and our review unit.