Life with a laptop doesn’t usually come without some sacrifices when it comes to performance. We give up the powerful graphics, faster hard drives, and faster processors in exchange for portability. Not to mention, laptops are typically much more difficult to upgrade than their desktop counterparts.  One area that seems commonly neglected on both desktop and laptops is the audio. Now granted, onboard motherboard audio has improved by leaps and bounds over the last couple years, but still don’t match the performance of a good quality discrete audio solution. Laptops suffer even more because by design, audio components are shoe-horned into a tiny chassis.

This year, ASUS has decided that it was time to up the ante for audio. ASUS introduced two balls to the wall sound card solutions for the desktop PC known as the D2 and D2x, featuring high quality parts, an EMI shielded bolted to the PCB, and a crazy 116 db signal to noise ratio. Since ASUS also manufacturers some particularly high quality laptops, they didn’t leave those customers behind and introduced the ASUS Xonar U1, an external USB Audio Station built specifically for laptops. The Xonar U1 is also suitable for small form factor desktop systems that lack space to upgrade to a discrete PCI or PCI-E audio solution like their D2 or D2X.

Although the Xonar U1 works for desktop systems, I feel that this device is really aimed squarely at the mobile computing crowd. The small size of the unit coupled with a built in headphone amplifier and Dolby Headphone Surround technology all scream “take me with you on the road”. With high quality audio on the road, movies as well as music should be less of a sound quality compromise while on the road. For the fashion conscious, the Xonar U1 also comes in a number of high gloss colours to match your mobile gear. 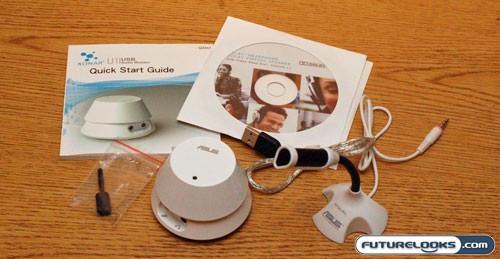 The Xonar U1 comes with the following stuff in the box…

In order to educate people on what they are missing out on, ASUS included a demo DVD disc with a load of demos to dazzle you with the increased audio quality. The manual was really well laid out and is printed in a number of languages. ASUS normally does a good job with their manuals, and this one was no exception.

The optical/SPDIF adapter turns the headphone jack into a receptacle for an optical cable, allowing you to hook the Xonar U1 into your home theatre receive to extract a digital audio signal. 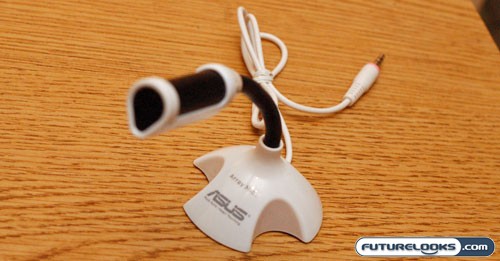 Finally, an array mic is also included to help you take advantage of some of the more colorful entertainment features of the Xonar U1. Karaoke anyone?