Going in for a Close Up…

The reign of the monstrous video cards continues with GTX 275. It is essentially the same exact size as the older 9800 GTX series.  It sports a super shiney black fan shroud over the entire length of the card that takes up two PCI slots. You can’t see any of the components on the PCB except for the back side however, the black PCB continues to be a nice touch  and a welcome departure from the old school green. 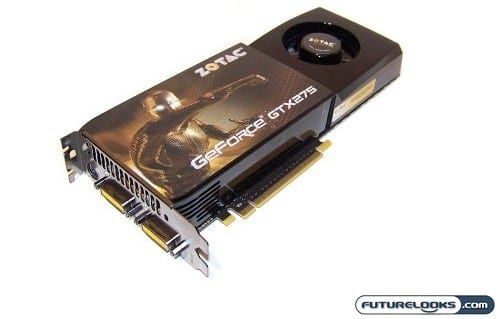 Video cards use to offer their own heat sink design with a cool theme. Nowadays, they all look the same except for the stickers on the fan shroud, and maybe different colored DVI ports. As you can see, it can be hard to tell one manufacturers card from another these days. An LED fan wouldn’t be a bad idea for adding a little video card differentiation. Dare I say, the days of the custom GPU coolers are missed? 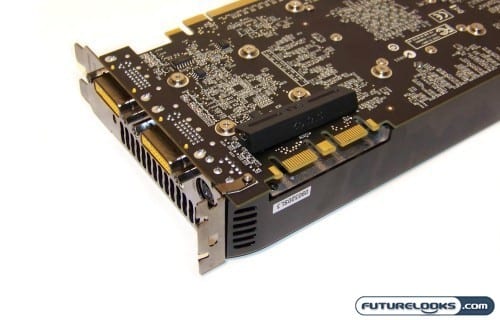 Dual DVI Monitor and SLI support continues to be supported like many other current nVidia based video cards. If you feel so inclined, one could easily add another GTX 275 and enjoy much higher frame rate averages with the power of SLI.If you’re wondering what kind of average that would be, This formula might save you from wasting your money on another video card: Simply calculate the average between the highest and average frame count.

In other words, if your card offers a 40 frame per second (FPS) average and tops out about 80 FPS high frame count, then realistic SLI performance will be some where in the area of 60 FPS. Sometimes your best bet it to buy one really good card rather than two, but at least you have that option. Oh, and the SLI connectors have included rubber covers to protect them if you don’t end up using them. 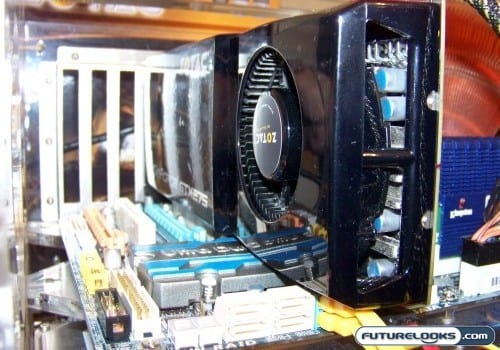 The ZOTAC GeFORCE GTX 275 is a fairly decent sized card so in addition to making sure that it clears everything, and make sure that it sits in the slot all the way. You can tell that it’s installed right by making sure the PCI frame of the video card sits down on the I/O PCI frame of your case. Anything less and you’ll likely encounter all kinds of issues. Other than that, just make sure your power supply is up to snuff and that you’ve got two PCIE connectors (or use the MOLEX adapters) and you’re set to go. If you don’t have a decent power supply, you’ll know because the drivers will taunt you with a popup screen, underclock your card and the performance will suck.

In order to thoroughly trash…I mean…test the ZOTAC GeFORCE GTX 275 video card, I assembled a test system with the following mix of components:

We also installed a range of benchmarks which included 3DMark Vantage, Crysis, Farcry 2, World at War, and Left 4 Dead. All driver settings were set to default with Vertical Sync was disabled. Resolution was set at 1920 x 1200.

After powering up the system, a fresh driver installation was performed to ensure complete compatibility and stability between the OS and video card. If you’re replacing a dated video card, make sure you uninstall the old driver first. Then it’s worth it to run as many 3D applications for the next hour to ensure it’s stable. Besides, it’ll give you and excuse to play some sweet video games.