Google may have started as just a humble search engine, but they have quickly expanded into just about every other area of our online lives. Many of us use Gmail for our email needs, Google Documents in place of Microsoft Office, YouTube for video sharing… the list goes on and on. Never completely content with the status quo, Google recently entered the web browser arena as well with the introduction of the shiny new Google Chrome.

Up until now, Google had been supporting the development and proliferation of Mozilla Firefox, so it is interesting that Google would choose to venture out on its own with its own branded web browser. It’s not like they built the browser from scratch though. Just as Firefox is based on the same framework as the now defunct Netscape Navigator, Google Chrome shares its fundamental foundations with Apple’s Safari and it looks just as good too. Apple and Google have a lot in common in that regard.

I’ve been using Google Chrome for about a month now, so I figure it’s about time that I voice my opinion on the new browser through a bit of a retrospective. 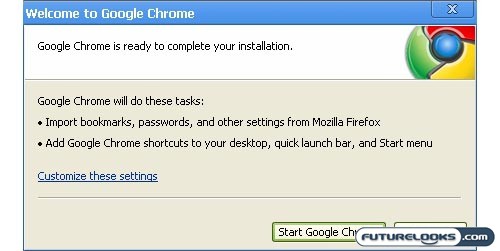 If you’re looking to install Google Chrome, which was known as Chromium during its development and alpha stages, the process is pretty much the same as installing any other web browser. Simply hit up the main download page on Google, grab the installation file, and follow the on-screen instructions.

Upon launching Google Chrome for the first time, you will be given the opportunity to import bookmarks, passwords, and other settings from Mozilla Firefox. I guess Google assumes that you are coming from Firefox and not from Internet Explorer.

Unfortunately, it is not possible (at least initially) to import your online bookmarks from a service like Del.icio.us. I guess since that boookmarking service is owned by Yahoo!, Google didn’t want to meddle with its competitor. Curiously, there isn’t a lot in terms of Google integration in Chrome either. If you click on an email link, for example, your default mail client launches; Chrome does not direct you to Gmail by default.

Moreover, the default homepage is not iGoogle. Instead, the default homepage is a collection of your most visited webpages. I love this feature, because it’s like an “at a glance” snapshot of your most frequently visited bookmarks. This is similar to the Speed Dial Feature in Opera, only better. Along the side, you also have a search bar, a list of recent bookmarks, and a list of recently closed tabs. 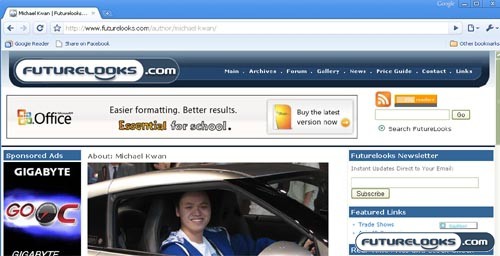 You may be wondering where Google Chrome gets its name. No, the search engine giant was not inspired by hip hop ballers like Lil Wayne and their insistence on chrome spinners and blinged out grills. Instead, it is a reference to the use of “window chrome” found in most applications. Window chrome refers to all the menu bars, status bars, and so on that you’d find in something like Internet Explorer and Mozilla Firefox. Google Chrome gets rid of that.

What results is a remarkably clean and minimalist appearance. There is no bar at the top of the window that tells you that this is Google Chrome. Contrast this to just about ever other Windows program. There is also no status bar at the bottom of the screen; this only appears when you hover over a link or when the browser is loading a page. As a result, more screen real estate is dedicated to showing you the webpages rather than all the “window chrome” that normally surrounds it.

This take on the web browser took some time to get used to. It’s certainly different and you may find yourself moving that mouse pointer over to top-left corner to find the file, edit, and preference menus. You may find yourself looking for the home, refresh, print, and stop buttons above the address bar. They’re not there. The referesh and stop buttons are integrated into the address bar instead.