It’s time to hit the stage once more with a living room full of plastic instruments. While there was The Beatles: Rock Band last year, the team at Harmonix and EA Games didn’t come forward with a true sequel of sorts. This year is different, because we’re getting offered Rock Band 3 on all the major consoles. Today, we’ll be looking at the experience on the Xbox 360.

Is it just a glorified track pack with nothing new to offer to the franchise or is Rock Band 3 an entirely different beast altogether this time around? Realistically, it’s neither. It’s more of an evolution of what we’ve already seen, growing in leaps and bounds like when the first fish decided to slide its way onto land. 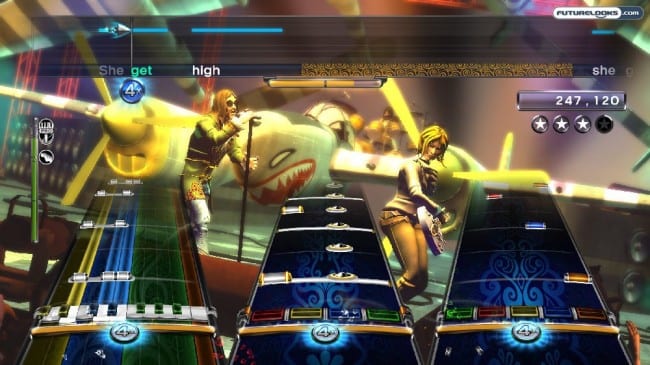 If you were following our coverage of E3 2010 earlier this year, then you may already be familiar with some of the upgrades that accompany Rock Band 3.

The most notable change is the introduction of “pro” instruments. On the guitar, for instance, you can opt for the Fender Mustang Pro guitar with its 17 frets and six strings for a total of 102 fret buttons. The drums toss in up to three cymbal attachments, plus a second bass pedal. For the vocals, you get the three-point harmony introduced with The Beatles and then there’s the brand new “keys” instrument, which can be played as either a keyboard or as a “keytar” slung over your shoulder.

Other niceties include a revamped career mode, a song filtering system, a persistent “overshell” player-specific menu, and a total of over 80 new songs on the disc itself. There’s a lot to like here.

Over 80 Tracks on Disc, Many More as DLC 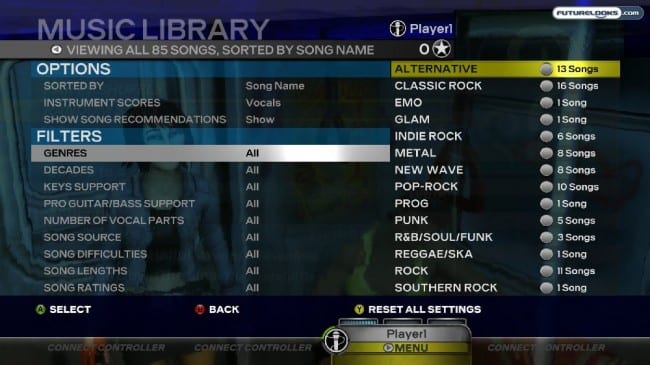 As before, the Harmonix team have come up with a rather eclectic assortment of tracks for you in Rock Band 3. You’ve got everything from the Beach Boys to Amy Winehouse, Ozzy’s Crazy Train to Paramore’s Misery Business. It’s a crazy set list and there really is a little something for everyone.

Your tastes may differ from mine, but I had a fun time playing Metric’s Combat Baby one moment and then switching it up to Marilyn Manson’s The Beautiful People the next. And let’s not forget about the ability to import songs from older Rock Band games, plus the nearly 2000 more available as downloadable content.

With that many songs, Harmonix realized that a simple “sorting” system wasn’t enough. That’s why I think it’s great that they introduced “filtering” instead. You can define your library based on a number of criteria, including genre, song location, decade, difficulty, and family friendliness, mixing and matching to sort through that massive list of songs. I kid you not when I say this is a true blessing that was since overdue.

Say Hello to the Overshell 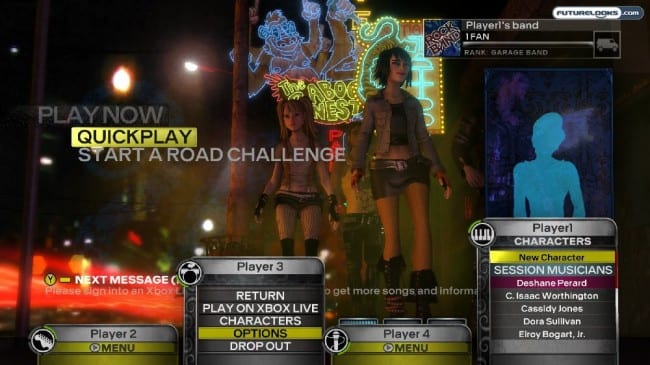 Remember how Guitar Hero 5 gave us party play with drop-in and drop-out functionality? Well, take that concept and crank it up to 11 for the “overshell” menu in Rock Band 3.

Instead of only existing within a “Party Play” mode, Overshell is a player-specific menu that can be accessed at any time, in any mode, on any screen. You can choose your on-screen character on the fly, switch difficulty part way through the song, and drop out if you need to feed the dog. No fail mode can be accessed this way too.

Another minor improvement? When you come back from pausing the game, the song rewinds a couple seconds so that you can re-orient yourself. We’ve all been in the situation where we’re on a killer streak, only to have it ruined by a game pause.