nVidia based video cards have gone through some revisions as of late. The most basic changes come in the form of a smaller, more efficient series of Graphics Processing Units (GPU) using a 55nm fabrication process. This GPU can be found in nVidia’s second revision GTX 260 with the 216 Core, GTX 275, GTX 285, and GTX 295. 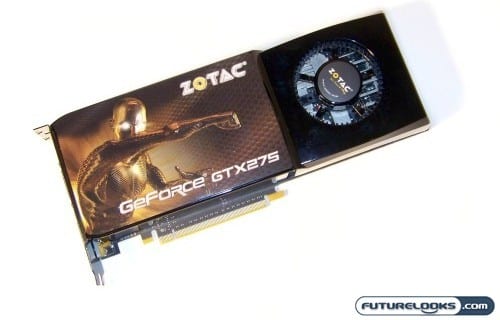 Fabricating smaller GPU die typically improves all around performance and lowers power consumption which equates to lower heat produced by the video card. Ideally, this should result in keeping the price of video cards down or at least offer a more affordable product for the price. Lower thermal properties mean we don’t need any massive, new GPU cooling solutions which almost always drive the price of any video card up. A good example of the new improvements reside in the ZOTAC Geforce GTX 275 896MB Video Card. Can we actually see these improvements at work? Let’s have a look. 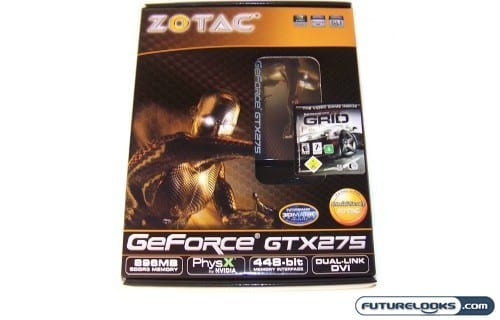 The Geforce GTX 275 is the base model in the ZOTAC arsenal. The other is the Geforce GTX 275 AMP! which is their factory overclocked edition. The reason for two is very simple: Some users want an overclock with a warranty while others want to earn it themselves and don’t care too much for the warranty. Different strokes for different folks. We’ll be looking at the non “AMPED” version today.

To put this all in perspective, the frequencies and power consumption are better than the previous 65nm GTX 280 except for the small drop in memory. The GTX 280 offers 1GB whereas the GTX 275 offers 896MB. Testing will reveal what kind of performance impact, if any between the two cards. That’s right. It’s a GTX 280 vs. GTX 275 duel to the death!

The ZOTAC GeFORCE GTX 275 is backed by ZOTAC’s lifetime warranty and should hit the shelves for about $249 US. 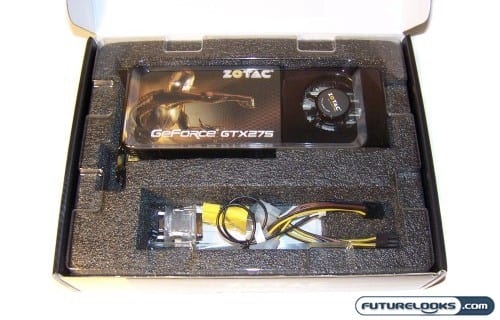 Typically, what separates one nVidia video card from one manufacturer to another is how they lay out the value added bundle that comes with the card. Inside the ZOTAC themed box is a well preserved Geforce GTX 275 in all its splendor. Included in the box is the standard User Manual and Driver Disc for getting your new video card up and running.

You’ll also receive extra PCI Express power cables that adapt any 4-pin Molex to power your video card just in case it lacks the PCIE power connectors. Not everyone’s PSU is up to speed and offers at least two 6-pin PCIE power cables. However, if you are buying this card and you DON’T have PCIE power connectors on your video card, then you might want to check if maybe you have the right connector on your motherboard, and not an AGP connector. Not having the PCIE connector (or two) on your power supply is pretty old school these days.

Other extras include an S/PDIF audio input cable for digital audio output through HDMI, a VGA to DVI adapter and an HDMI to DVI adapter. Also included is the latest version Racedriver GRID for the PC. Finally, a game that you might actually want to play and that can show off the abilities of this video card.