Like our video intro says, Cooler Master is having a 20 Year celebration. Believe me, that’s a serious lifetime in an industry where 6 months is already an eternity. The company has much to be thankful for and it continues to please users with designs that push the envelop like the recently released Comos II Ultra Tower Chassis. But of course, a company that has been around as long as these guys have know that sitting around and not trying is not an option. They’ve made quite a few announcements at CES 2012 this year and we share them all with you in our glorious 1080p HD video above or directly on YouTube!

An important part of Cooler Master’s business is power supplies and coolers. We were shown a new Silent Pro M2 series that takes over from the original, but offers an upgrade to 80PLUS Silver all at the same price as before. So in a nutshell you are getting a better Silent Pro PSU at the same price, from 850 watts to a whopping 1500 watts. For the lower end upgrades, all PSUs are receive an extra 25 watts of capacity to 425 Watt, 525 Watt, and 625 Watt. You’ll see all of these start to roll out in about Q2 of 2012.

For CPU coolers, we see a cooler from our visit with Cooler Master at COMPUTEX 2011. Originally introduced for the Chinese market at a less expensive price point, Cooler Master has decided to bring this cooler to North America to test things out. The Cooler Master X6 features heatpipe construction and a unique wave pattern in the fin pattern to optimize cooling efficiency. It still features that slight parallelogram design that aims the cooling fan 10 degrees downwards to help pull cool air towards it. The best part is the $49 US price point and Cooler Master claims that it will perform as good if not better than the original V8 cooler.

Finally, Cooler Master showed off a new vertical vapour chamber design that beats a CORSAIR H80 Liquid Cooler in a head to head battle. The new TPC 812 is able to dissipate up to 260W of heat using dual 130W vapour chambers which should handle nearly anything you throw at it, even overclocked. The best part is the $69 US price point which is about $20 – $40 better than most comparable liquid coolers. 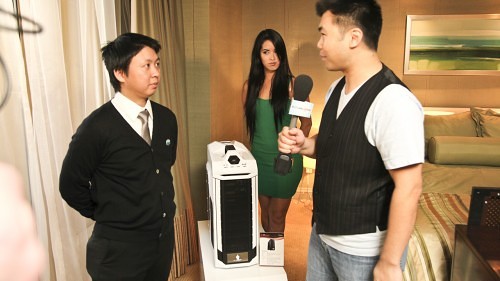 With the recent release of the Cosmos II Ultra Tower, it’s really hard to top that. But Cooler Master decided to try with a smaller version of the HAF X called the HAF XM. It can be described as a hybrid between the HAF X and the CM Storm Trooper, but in a smaller mid-tower design. Unique features include a tool free latch door design that pops the side panels open without additional screw removal and behind the back panel, there is a spot to mount a 2.5 inch SSD, keeping your main compartment clean and scumbag thieves wondering where your SSD is hiding. You’ll see it in early Q2 2012 and it should retail for $139 US.

Finally, the last case they showed off is basically a CM Storm Trooper but in a white motif, inside and out. But because a white case called the CM Storm Trooper raised eyebrows at Lucasfilm, the company has simply decided to call it the Stryker. The main difference besides the color is the new side window design which shows off all your stuff. It’ll be $10 more than the original making it a tough choice between the two. Personally, I’d poach the white one in a heart beat. Expect it out in the market around early Q2 2012.

The gaming peripheral division of Cooler Master, CM Storm, launches a number of updates to their keyboard line up. You’ll see a new Quick Fire Rapid Red which features red switches which are highly sought after and an emphasis on the WASD keys with a red cover. They also launched two new full sized keyboards including a Quick Fire Pro that features options for blue, brown and red switches depending on your preferences. The new Trigger keyboard is more mainstream and uses brown switches. It’s fully LED backlit and features a wrist rest and 64kb memory for macros. All the keyboards features a USB braided cable that is removeable.

CM Storm also released a new optical mouse that is ambidextrous and features a 1.2mm lift off on black surfaces and a 3500 dpi sensor. Pricing for all of the above is still to be determined along with final launch dates.

What You Didn’t See On Camera…

There were a couple things that didn’t make it to air so we thought we’d update you here. For starters, the Cosmos II Ultra Tower case will be receiving two new color choices which should hit the market right after the first revision black hits the market. It’ll come in a retro Cosmos 1000 silver and a platinum/brown colour. The best part is that neither color choice will impact pricing. However, with the scarcity of some colors over others, you may have to pay more for them anyway.

We also saw the promised CM Storm Sirus Xbox 360 adapter. This allows the CM Storm Sirus headset to work with your Xbox 360 or PS3. It’s coming soon and pricing is to be determined.

Finally, in one of the bathrooms which was dubbed the “NDA” room, I can tell you that Cooler Master is working on things that fill all that water cooling potential in their cases. Let’s just say that they went to Germany for these solutions and they look absolutely “Über”. They also showed off something that testers and reviewers currently using open test benches will want to check out. There are still many tweaks that will need to be made until any of us will find it acceptable, but they are hoping to put it out there for around the $100 price point. I know a piece of plastic that EVGA sold for testing was $200 so I’m really looking forward to seeing what Cooler Master comes up with in final form.