The selection of games I use are not a comprehensive test as it is only 3 games. I use these games to test the widest range of game variables with the least number of tests. This set covers DX9, DX10, and DX11. It shows performance on a game with a lot of graphical features in Metro 2033 and a game with relatively few graphic features in RE5. In the near future I will be replacing Metro 2033 with Battlefield 3. 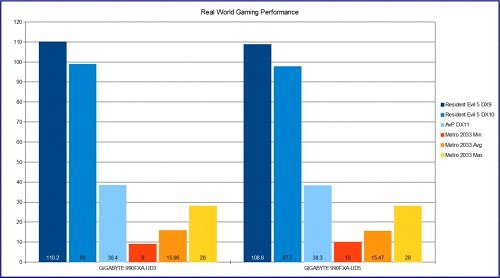 As you can see, the difference in gaming is non-existent. There is a maximum advantage of 1.4 FPS for the GA-990FXA-UD3, but this could be due to the number of factors including the Bulldozer Optimization patches for Windows 7. Either way the difference is less than 2% and cannot be felt in day to day use.

During testing I found that CrystalDiskMark had a small issue with how it does its testing. As it was geared to test mechanical HDDs using a single data set (in my case 1 GB in size) and outputs the average performance. This seemed a little misleading as the SSD being tested is often able to max out its performance. I switched to ATTO Disk Benchmark for sequential read/write tests and used the best numbers for the various file sizes to give a better representation of performance. 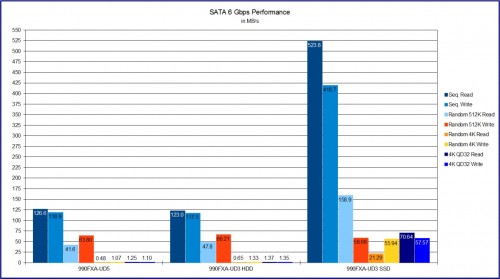 The GA-990FXA-UD3 comes out ahead of the UD5 in every test by a small margin except for sequential read/write testing for mechanical HDDs. Please note the hard drive test for the 990FXA-UD5 were done on the drive being used as the primary system drive, which could have changed the results. It is also very clear why comparing an SSD to a mechanical HDD is not fair as the random 512K write speed aren’t even in the same ballpark. The SSD used is rated to have a 520 MB/s read and 490 MB/s write speed. The GA-990FX-UD3 pushes past the read speed by 3.7 MB/s but falls just over 70 MB/s slower than the best case performance.

This I/O test will be centered on the performance of the USB 2.0 using a thumb drive. It gives us the opportunity to see if the trend set up by the SATA 3.0 (6 Gbps) performance continues with all other I/O tests. 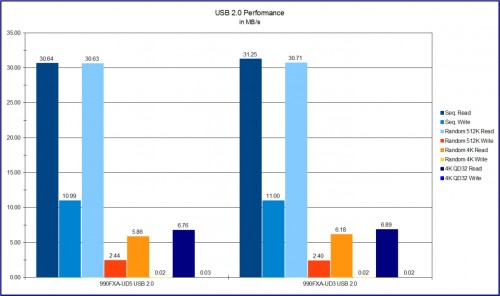 This time the performance is nearly identical. In every single test the two motherboards are within 1 MB/s of each other. Unlike the previous test, there is no distinct advantage for either motherboard.

The final I/O test will be with the external HDD connected via USB 3.0. For this test I load the 1 TB drive with around 550 GB of data to simulate expected performance of the drive after use. This is the same data I used when I first tested the 990FXA-UD5 some time ago. It is actually some personal data that I had moved off that drive, but decided to move back for these tests. 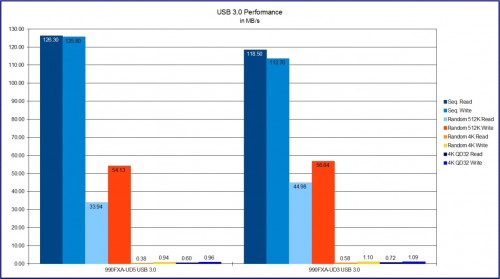 This time we get the same performance as we did in the SATA testing. The GA-990FXA-UD3 has better performance in every test, some by a significant margin, except for the sequential read and sequential write tests. Both motherboards are using the same native SATA controller and the same Etron EJ168 chip for USB 3.0, so I am not sure why the same trend is occurring. There may be some difference in how each is attached to the south bridge.

I do not expect much difference in these results as both use the Realtek HD ALC889 codec for the Realtek proved audio chip by default. Both have 6 caps for audio processing as well.

There only difference is in the Dynamic Range and Noise Level in which the 990FXA-UD5 is one tier above our 990FXA-UD3. While this does mean the UD5 should have better audio, real world testing does not reflect this. The same issues I have with the UD5 built-in audio still exist. It produces good sound quality at lower bit rate songs with full body with little distortion or noise; however, there is some slight audio bleed to the front channels during 5.1 playback.

Its not enough to affect enjoyment of a movie or music, but it can create issues with identifying where a sound came from in gaming. It was never a hindrance when playing my usual titles, but I did notice the difference as I was use to using my Xonar DG which does a better job of cross talk control. I could not hear any crosstalk between the left and right channels. 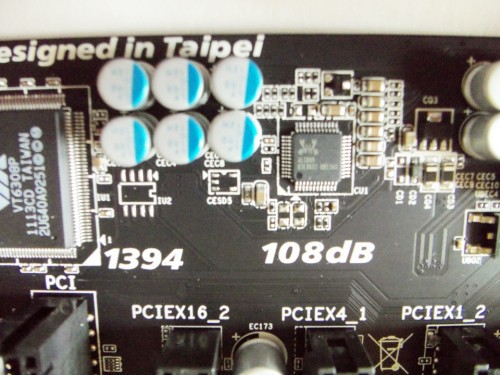 Finally, I would like to point out all GIGABYTE motherboards I have tested so far also support the use of Dolby Digital Home Theater codecs. Using this should create a much better listening experience, but I am not sure how it would affect the performance of the audio system under RMAA. When I test the final board in this line the GA-990FXA-UD7, I will be sure to test both codec packs to see if the quality difference can be measured digitally as well as perceived.