We were introduced to the newly upgraded Razer Blade Stealth just a few months ago, but those high-powered enthusiasts at Razer aren't just sitting on their laurels. The premium gaming laptop has just undergone yet another series of upgrades, including Intel's latest quad-core 8th-generation Core i7 processor. You want performance? This will blow you away. And then the new Razer Core V2 takes you even further.

The new quad-core variant on the Razer Blade Stealth still fits into the relatively compact package, empowering you with "extraordinary performance and responsiveness with Turbo Boost speeds up to 4GHz." All the while, you can also enjoy improved battery life (up to 10 hours) when you find yourself away from a wall outlet. 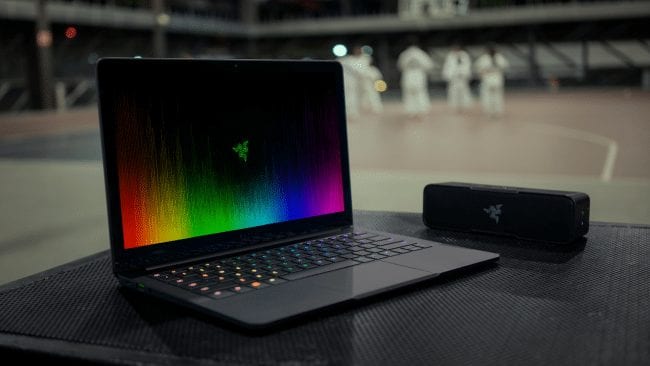 Some other key highlights from the new Razer Blade Stealth include the 13.3-inch quad HD+ (3200x1800) IGZo touch-enabled display with 100 percent sRGB, 16GB of dual-channel system memory, Intel HD Graphics 620, a 512GB PCIe SSD, Killer Wireless-AC 1535, Thunderbolt 3, and an anti-ghosting keyboard. If you get the black version, you'll be powered by Razer Chroma. If you get the gunmetal model, you get white keyboard backlighting.

Finding that the Intel HD Graphics 620 are a little lacking or you want to enjoy desktop quality gaming in a more versatile configuration? The new Razer Core V2 fits that bill. Just connect to your Razer Blade Stealth via a single Thunderbolt 3 (USB-C) cable and now you've got access to a desktop-class gaming experience.

The Core V2 features the world's first dual Thunderbold 3 internal controller design to separate the lanes for graphics and connected devices. The enclosure itself also has four USB 3.0 ports and Gigabit Ethernet to handle your peripherals, like your Razer gaming keyboard, mouse and headset. You will need to supply your own GPU, of course, and the V2 supports everything up to the NVIDIA GeForce 10 series and AMD Radeon 500 series with XConnect.