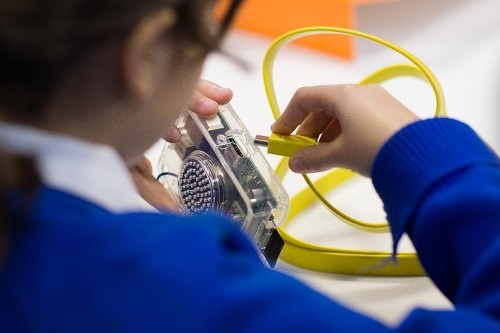 When it comes to children and their capacity for learning, all you have to do is just put something in front of them. They’ll consume it in short order and they’ll want more, whether it’s from a game console, a smartphone, a tablet, or a computer. But it’s very rarely you’ll ever hear them asking “how does it work”? This is where the Fab Lab, based in London, has figured out how to get them to “think different” in this digital consumption culture.

With classes of around 60 children each, the Fab Lab gets kids back to basics by teaching the fundamentals of PC DIY. Kids get to build their own systems by putting CPUs onto motherboards, adding memory, speakers, and putting them into cases. They also get to hook up their own screens and power them up. Sometimes it’s like a “build your own PC race” as kids hurry to get their system to boot so theirs can say “Champions!” on the screen.

The kits they use, called a Kano, cost about $149 US, and was a crowdfunded project to help kids learn basic coding. However, the PC DIY friendly nature of these kits, has made them something more. Something that will allow kids to understand how to create the hardware, that they code for, and hopefully, get them on track to create the hardware and software of tomorrow.

The UK (along with Estonia) is also introducing coding and computational thinking, as part of the curriculum. And along with this new found appreciation for building systems, the future certainly looks bright for the next generation of builders.