This test should be very straight forward. As we have seen in previous reviews, less complex boards tend to use less power. As the GA-990FXA-UD3 has fewer PCIe slots and some differences in is power design. I expect it to come in just behind the more complex 990FXA-UD5. 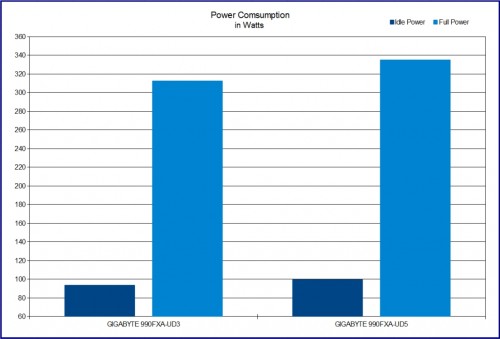 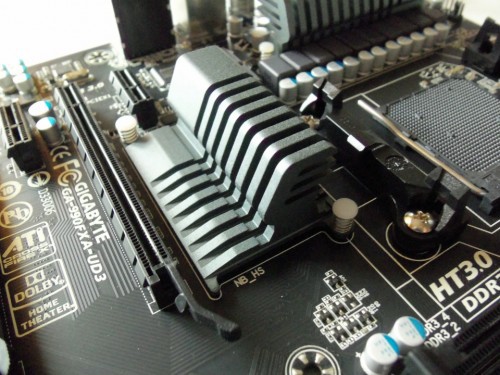 The GIGABYTE GA-990FXA-UD3 is the line between high performance and your average motherboard. Many boards I have owned or tested with a price tag below the $154.99 price of the UD3 just fall short in some way. It is often due to lack of feature, lack of support for certain technologies such as CrossfireX and SLI, and some just struggle with usability. I didn’t really have any issues using the UD3 and getting in and out of the traditional BIOS was a breeze. Its POST failure recovery and dual BIOS helped me to avoid a few bad boots during the BIOS update and during overclocking.

While the board was doing its job well, keeping itself from sitting at a black screen and preventing user error, thanks to the excellent Dual BIOS, it was not being very friendly about overclocking. It seemed like it was fighting me on it at every turn. There were differences in both the BIOS and in Windows voltages registering huge fluctuations in peak voltage for the CPU. The further up I pushed the CPU voltage, the more unstable it seemed to be. But until this instability limit was reached, it would run like a dream. There is definitely a strong line between stable and not stable here. 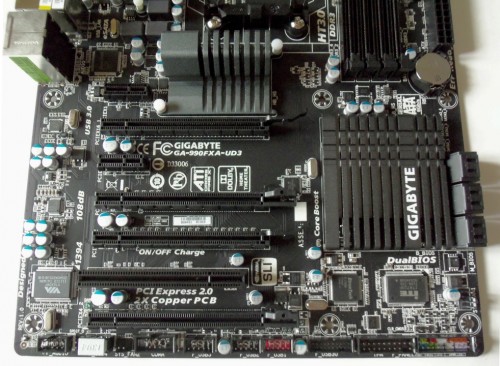 While I do believe the GA-990FXA-UD3 is about $10 too expensive compared to competing boards, and I felt overclocking was a bit limited, there is nothing else I can complain about with this motherboard. It supports every feature GIGABYTE offers short of the unique features on the G1.Killer series. It has a beautiful all black color scheme with white and gun metal grey trim. I use the 990FXA-UD5 as my personal system’s motherboard and I didn’t have to give up one single feature or connectivity option when switching to this board for testing.

If you do plan on doing more serious overclocking and/or use three GPUs, you will want to spend the extra $25 on a UD5. If you never plan to use more than two graphics cards and/or don’t overclock your CPU very far, then you can use that $25 on a dedicated audio card or try upgrading another part of your system. If you are after CrossfireX or SLI support then the GA-990FXA-UD3 $154.99 price tag is within your budget, then there is no reason to try to save any more on lesser 990X series boards. The extra features should ensure you get your money’s worth.