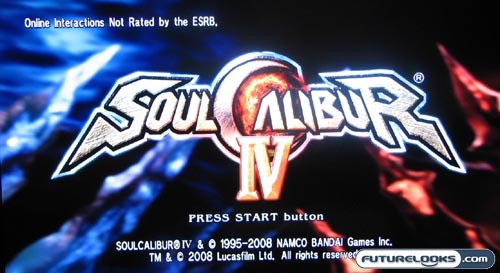 Ever since Street Fighter II hit the local arcade almost twenty years ago, I’ve been hooked to fighting games. It’s not like I ever got particularly good at them or participated in any fighting game tournaments, but there was a certain appeal to learning how to use each of the characters and mastering their various special moves. It was always a mind game with my human opponent at the body odor-infested arcade.

Perhaps the single biggest defining characteristic of the Soul Calibur series of fighting games is the inclusion of weapons. This is in sharp contrast to the bare-fisted battles in Soul Calibur’s Namco stablemate, Tekken. As such, I felt that I had a pretty good idea of what to expect when I picked up Soul Calibur IV for the Xbox 360. I was going to experiece some weapons-based combat and I was going to like it. By and large, I’d say that I was right.

Clashing Weapons and the Power of Soul

If you’ve ever played any of the Soul Calibur games in the past, then you’ll feel right at home with Soul Calibur IV. It’s a one-on-one battle involving a wide myriad of swords, staffs, blades, and other assorted weaponry.

In stark contrast to the first Soul Calibur, the graphics in Soul Calibur IV are absolutely amazing. This not only includes the character models with their individual strands of hair and cloaks flowing in the wind, but also the richly detailed backgrounds that evoke that sense of dark (and light) soul. I’d still say that Virtua Fighter 5 wins in the visuals department, but SCIV is awfully close. 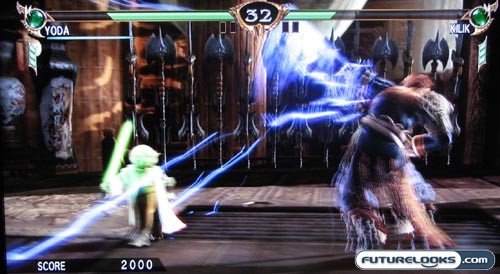 Soul Calibur IV is a 3D fighting game, so you are offered 8-way movement. The controls are largely left unchanged from previous incarnations in the series, so you’ve got a button for horizontal attack, vertical attack, kick, and guard. For the most part, novices can have a fun time with button-mashing, but that won’t get them far against the more advanced players. There is a lot of depth to the fighting mechanic, and it’s not just about reflexes. A lot of it has to do with timing and selecting just the right moves. Soul Calibur IV can be as simple or as complicated as you’d like. 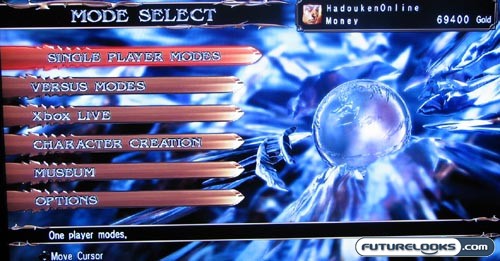 Although it is certainly more enjoyable to hit up the Versus mode with a buddy, Soul Calibur IV offers a few different options for when you find yourself alone as well. There are three single player modes in all, as well as the training mode.

With Story Mode, you walk through the brief tale of your chosen character. I thought that this was the primary single player mode, but each story is only comprised of about five matches. That’s hardly a story and I was really disappointed in this respect. Yes, some fights are multi-character (as each character dies, he/she is replaced by another), but it’s still way too short. 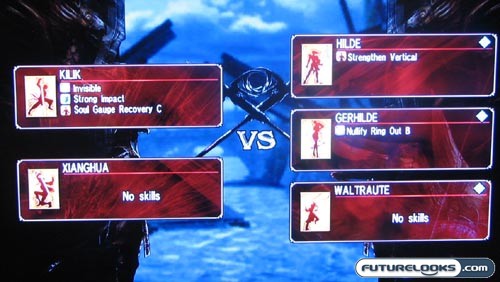 Arcade Mode simulates the arcade experience with a few more fights, capped by a boss battle. Where the real single player value lies, however, is in the Tower of Lost Souls. You choose to either ascend or descend the tower a couple of floors at a time, selecting new fighters each time. Certain conditions are manipulated to provide new challenges and the team-based focus is refreshing.