LAN events always have some great non-gaming activities for everyone to take part in and LANcouver 2012 offered a few really great ones. One of the things we wanted to do was a PC building demonstration that had two people, with the help of a coach, rebuild their PCs into new cases. A case swap competition if you will. While the head to head demonstration never happened, we did manager to modify the event and make it just as fun. Mark, our lucky volunteer, knew that he was one of a few hand chosen people that would potentially undergo a swap, but he didn’t know when and where we’d pop up. Thanks to ANTEC, we really made Mark’s day and taught him a whole bunch about building a system that you can’t get from reading. See it all in the video above or check it out on YouTube.

We’re Going to Swap Your Ride! 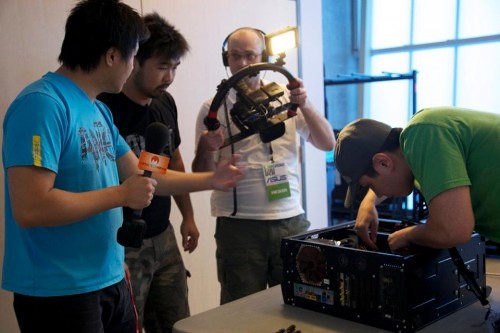 Yes, I had way too much coffee that morning. But even if I didn’t, I would not be able to contain the excitement of being able to help someone learn how to build their own system. Mark was a great sport as we nitpicked every part of his system, from the duct taped hard drives and fans, to the cat hair sweater on the liquid cooling system. We even found a short curly hair in the GPU! Eww!

From beginning to end, William from ANTEC and I made sure that Mark was completely hands on while doing the swap from his old ANTEC 900 case to his new ANTEC Eleven Hundred chassis. We only stepped in when he had a problem and by providing guidance and advice along the way, Mark now knows most of the basics of swapping an old system into a new case. This will also get him ready for his next DIY PC build which he plans on doing in the very near future. He’ll also now be a great resource and inspiration to his own circle of friends and enthusiasts.

Throughout the build, which took a total of roughly 2.5 hrs, we had a very captive audience. They asked questions, we fired back answers, and they were very supportive of Mark and what he was about to accomplish, almost completely solo.  It’s one of those really rare opportunities that you can’t say no to because the skills and knowledge you take away are for life.

We wish Mark all the best in his PC building endeavours and we hope to see him out there passing on the knowledge at the next LANcouver! 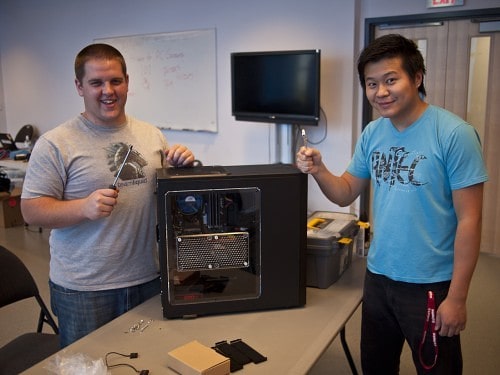 After an exhausting 2.5 hrs, we had another opportunity later that afternoon to help one of the eSCN casting team members swap his old case out. Although we had all we needed to produce the video above, William from ANTEC volunteered another couple hours to help make a difference in someone’s DIY PC building experience. Dennis Pang of ASUS, who actually helped design the Eleven Hundred Case during his tenure at ANTEC, also helped out with the build and provided a few inside tips that only one of the “Uncles” of this case could provide.

There was certainly some great DIY building, teaching and knowledge passed on with some generous donations of time and cases from ANTEC. It was also great to see so many people interested in learning, asking questions and supporting the ones taking the first steps to being first class DIY’ers.

While there’s absolutely nothing wrong with buying a system built well by a shop or a major manufacturer, the knowledge gleaned from having first hand knowledge of how everything should go together goes a long way to making the right decisions on a system. We hope our demonstrations during LANcouver gave everyone a bit more confidence in both their buying and building endeavours. Stay tuned for more video recaps of the fun events from LANcouver 2012!

Help Us Improve Our Event Coverage By Leaving a Coment Below!