Thanks to the recent cell phone ban in Vancouver, along with similar restrictions in many other jurisdictions, the demand for handsfree devices is definitely on the rise. For people who don’t like wearing Bluetooth headsets, Bluetooth speakerphones can be a much more comfortable and convenient option for people who like to talk on the phone while driving.

I had the opportunity to try out the first Scosche solCHAT solar-powered Bluetooth speakerphone a while ago and was generally pleased with what it had to offer. The second-generation Scosche solCHAT II (CBHSOL2) takes on the exact same form factor, but it comes with a few minor upgrades worth noting.

In case you can’t quite figure it out, the Scosche solCHAT is a Bluetooth speakerphone that is designed for use while driving. You attach it to the windshield or your car visor, allowing you take calls while keeping both hands on the wheel and both eyes on the road.

Easily the most notable feature is the large solar panel that takes up the majority of the back. When mounted to the windshield, this panel will soak in the sun’s rays and keep the speakerphone charged. This green technology is both environmentally-friendly and convenient. The only downside would be if you park in complete darkness. If that happens, Scosche has included a car charger.

Other highlights include a voiced menu, one touch dialing, voiced caller ID announcements, and DSP echo cancellation. The retail price will set you back around $99.99 US although deals on these types of products are often fairly abundant if you shop around. 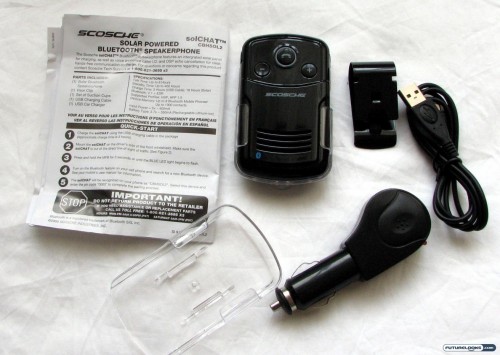 Not surprisingly, Scosche has included pretty much everything that you need to use this Bluetooth speakerphone. There is no carrying pouch, but you don’t really need one of those anyway as it sits on your dash and stays there.

As I mentioned earlier, I had the opportunity to try out the first solCHAT and, at first glance, the solCHAT II is virtually identical. The design is the same, the buttons are the same, and the basic functionality is the same. However, I started to notice a few differences when I started to use the solCHAT II. In fact, just turning it on for the first time resulted in a couple of surprises.

The previous model had a voice that told you when it turned on, but the solCHAT II also tells you when it enters pairing mode and when it successfully pairs with your mobile phone. Another minor change is that the light ring surrounding the main call button illuminates in red when the Scosche is charging via the solar panel. This uses a little bit of battery, I’m sure, but it’s good to know that it’s working.