Using the Scosche solCHAT II is easier, I found, than the usual interface you’d have with a Bluetooth headset. This is largely because you can see the buttons, rather than when something is attached to the side of your head.

There are a total of four buttons at your disposal. The main button (with the phone symbol on it) is used for turning the unit on, turning it off, answering calls, activating the voice dial function, and ending calls. The + and – buttons are for volume control. The mode button, located on the side, is used for switching between the different call modes. This is one major feature that separates the solCHAT II from some of its direct speakerphone competitors.

Most Bluetooth speakerphones are designed to take your calls and blast out the “earpiece” half of the conversation through their speakers. That makes sense, because that’s what they’re supposed to do. The Scosche solCHAT II does that too, by default, but you have two additional calling modes at your disposal too.

By hitting the mode button on the side once, you switch to “privacy” mode. You can hold the solCHAT II in your hand (upside down) and use it like a phone. The speaker is the earpiece and the microphone (the little hole) is where it should be. You won’t want to use that mode while driving, of course, but it does come in handy if you’re taking a call in the company of others and don’t want them to hear everything.

The third mode comes when you press the mode button twice. By doing so, the call is transferred back to the paired cellular phone. When you want the conversation to go back to the Scosche, you hit the big call button again.

The pairing process with the Scosche solCHAT II is exactly like so many other Bluetooth devices. You get your phone to search for available devices, you turn on the solCHAT II, and you select it from the list that appears on your phone. Apparently this is really difficult because Best Buy charges for pairing your headset and people actually pay it.

In the older unit, you had to hold the call button for a certain amount of time before it ended pairing mode, but the new version does this automatically when it does not detect a previously paired device. The solCHAT II also announces, via voice, that it is in pairing mode.

Regarding call quality, the volume coming out of the speaker was loud enough for a comfortable conversation behind the wheel, provided that I turned down the music coming out of my stereo. The microphone is a little on the weak side and it is further away when mounted on the windshield, so you may need to speak up a little. It’s good enough to get the job done. 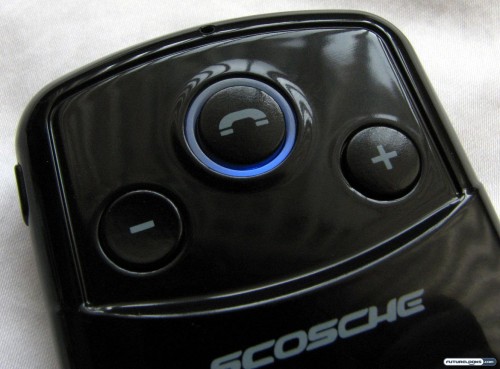 I was already reasonably happy with what Scosche did with the first solCHAT. They say that if it ain’t broke, don’t fix it and this philosophy easily applies to the newer version of the Bluetooth speakerphone.

The form factor works quite well for its purposes and the solar panel really makes this a convenient item to use. It won’t be very useful if you always find yourself in underground parkades, but the USB charger is a handy backup if that’s the case.

While other Bluetooth devices get you to rely on blinking red and blue lights to understand what is happening, the solCHAT II has a great “voice announce” feature that walks you through everything. It even announces caller ID with the name of up to 1000 contacts.

If you’re looking to keep both hands on the wheel, both eyes on the road, and nothing on your ears, the Scosche solCHAT II is a great option for your handsfree needs. At $99.99 US MSRP, it will most certainly cost you less than the fine for driving without one.