Speaking of power, lets see home much power was being consumed by these graphics cards during full load. These test were done by using FurMark GPU stress test to ensure 99% to 100% usage of the GPU core. Idle testing was observed once the card reached its minimal temperature and sat unused for at least 10 minutes. Please note that the computer was not running any programs, but was not allowed to enter sleep mode either. 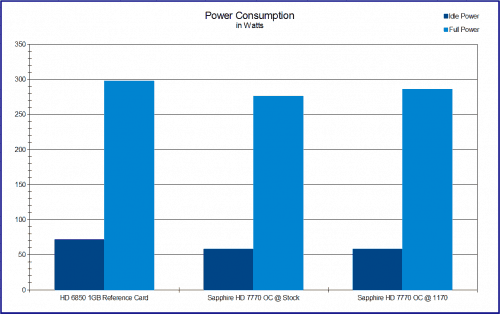 The Sapphire HD 7770 GHz Edition OC takes a very distinct advantage here. At idle the HD 7770 uses 13.4 watts less power. At full load, it uses 21.6 watts less power at stock and 11.5 watts less overclocked. This brings to light a very simply fact: Overclocking the Sapphire HD 7770 GHz Edition OC any further is not worth it. You only gain 1 or 2 FPS for a full 10 watts at load. I personally would rather just save money on the power bill and increase the lifespan of my hardware.

Now lets see how well these room area heaters perform keeping things toasty in the winter. This test is simple as I simply took the temperature readings directly from AMD CCC while I was testing power consumption. These temperatures matched with with FurMark as well. 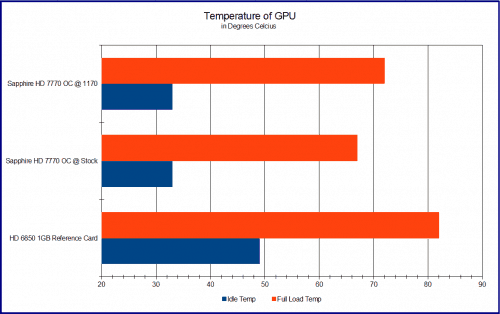 There is simply no competition here as the Sapphire HD 7770 is 16 degrees C cooler at idle and 15 degrees C cooler at full load. Even when overclocked further it still holds a commanding lead over the HD 6850. Once again though the 50% additional power requirement to gain the meager 20 MHz/25 MHz is just not worth the extra 6 degrees. While not much, coupled with the 10 watts of extra power being burned for virtually no gain is just pointless. 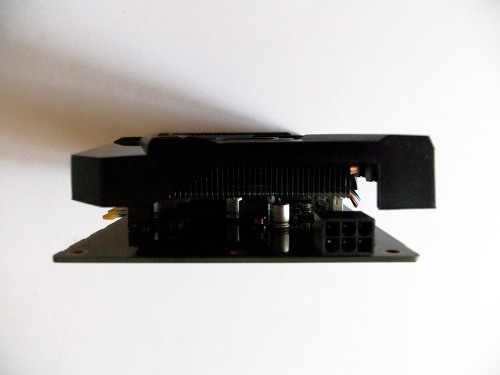 Testing the amount of noise created by the Sapphire HD 7770 GHz Edition OC proved to be more difficult than expected. While enclosed within either of two cases I tried, neither card produces enough noise to heard over case fans. When I attempted to test the cards with the case fans disabled and the side panel removed, only the reference 6850 1GB produces enough noise to register on my meter’s minimum of 30 dBA at full load.

While I could not get the proper test results to visualize this, the Sapphire HD 7770 is less noisy than the HD 6850 Reference card at full load. I believe the noise at idle for the HD 7770 is lower as well, but I cannot be sure enough to state that as a fact. I can say the noise the HD 7770 does create is more mellow and easier on the ears, and for the most part, is a non factor. 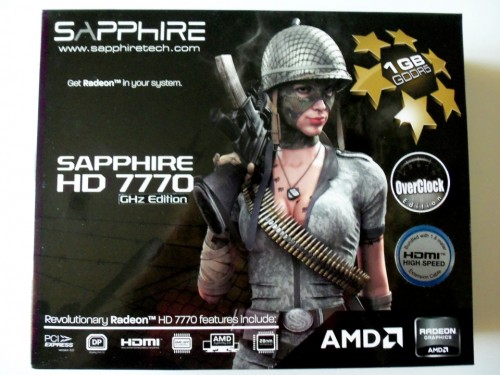 The Sapphire HD 7770 GHz Edition OC is the best in its class, but still not very impressive in the grand scheme of things. Don’t get me wrong here. At the price point of $149.99 it is a great buy for those building a new mid range system or those upgrading from any previous generation card that is a 6790 or lower. Even if a similarly priced AMD GPU matches performance, it will still be at a clear win in power consumption, noise, and cooling for this card, as illustrated by its battle with its closest sibling still on the market, the HD 6850.

If you can only spend $150 on a new card I would give some consideration to the Sapphire HD 7770 GHz Edition, Sapphire HD 7770 GHz Edition OC, and the Nvidia GTX 550 Ti (or the GTX 460 Ti which has come down a lot in price and can still be found in stock at many retailers). The Sapphire  HD 7770 OC is not the best price to performance ratio card, but is no slouch either. Sapphire creates value for it by including extras and providing a nice overclock over stock.

I personally would not consider this card, but I am also one who normally spends around $300 on each GPU upgrade at a time. It is a market that something with the HD 7770 capabilities could never compete in; however, I could easily recommend this to anyone looking to add a little punch to a pre-built system or a budget gaming rig. There are still many games that will run at optimum frame rates that are very popular such as Counter Strike and Starcraft II.

On the other hand, It would also be a great card for a work system that needs multiple monitors. The connectivity is quite extensive at this price point.

There really is nothing bad to say about the card itself, but it does fall a little short when you factor in what is available for the same price in the marketplace, when you are looking at gaming cards. nVidia has a few options as mentioned and even something as old as the GTX 460 Ti, is still available at retailers for around the same price.

In the end, it really isn’t the fault for the mediocrity of this card. Sapphire has done all they can with the HD 7770 GPU. Until some of the old vets start disappearing from the market, the good of this GPU just isn’t good enough for the asking price.