Overclocking the Sapphire HD 7770 GHz Edition OC was impressive but futile. This version of the Sapphire HD 7770 has a factory overclock of 1150 MHz core and 1250 MHz memory. This places it just north of some of the best overclocking numbers reached by other cards which often stopped at 1100 MHz. When I began to push the clock rate up, I found that Sapphire has already squeezed every drop of power that they could already. 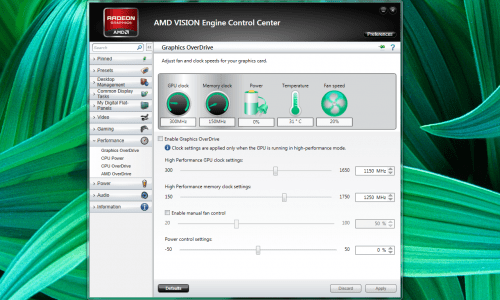 I was ultimately able to get the Sapphire HD 7770 GHz Edition OC to perform some tasks such as media playback and converting video files at 1190 MHz; however, any attempt at 3D tasks such as gaming results in an immediate crash. AMD CCC allowed me to add up to 50 % power to the card which is the only way I could even get the HD 7770 to reach 1190 MHz. The issue was not related to heat as the card stays well within specs during these attempts.

The best speed I could reach with 100% stability and the ability to play a 3D game (Battlefield 3 in this case) for several hours with no worry was at 1170 MHz and 1275 MHz memory. The question would then be is it worth it to overclock the Sapphire HD 7770 GHz Edition OC any further. Well lets find out!

We will start with getting a general idea of what we can expect from the Sapphire HD 7770 GHz Edition OC with 3DMark11. This should give us a good idea of the in game performance which is ultimately why most people will spend $100+ on a new graphics card of any kind. 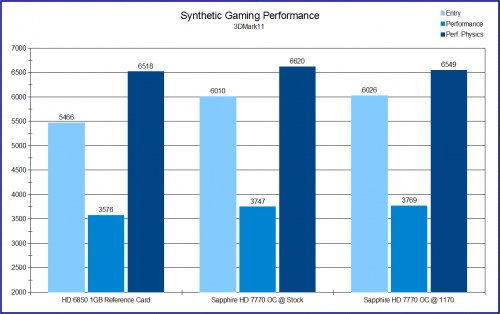 There is a slight advantage over the HD 6850 in all tests with overclocking the HD 7770 bumping it up a fraction more. It would seem that low end games should run better on the HD 7770 with performance between it and the HD 6850 leveling out the more demanding the games become. Lets see if this holds true with real games.

First I would like to see the performance of the Sapphire HD 7770 across all three DirectX versions. In the AvP portion we should also get a good idea about how tessellation performance has been improved or not. Resident Evil 5 is tested using the variable benchmark with settings maxed out, frame rate unlocked, and VSync disabled. AvP was tested with its default settings which includes DX11, more moderate tessellation, and high graphical detail. 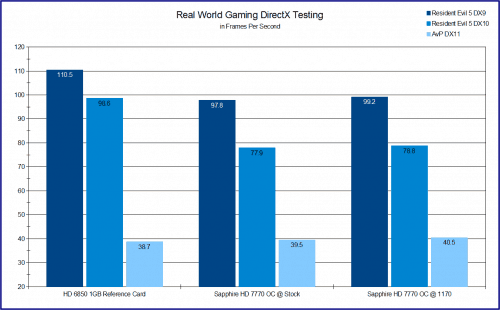 The Sapphire HD 7770 falls behind the HD 6850 by 11.5% in DX9 and by 19% in DX10 at stock settings; however, it pulls ahead in DX11 testing by 2 %. Overclocking the memory and core as little as I could does give an extra frame or two per second of improvement, but nothing significant and surely nothing that one should go after as it may risk stability or reliability long term.

The Sapphire HD 7770 GHz Edition seems to have an advantage with DX11 games. This could very well be true as the GCN architecture was intended to be forward thinking. Lets confirm that and see if the older game engines perform better or worse with the new architecture of the HD 7770.

Metro 2033 was tested with all settings maxed out using FRAPS in the same section for both cards. Battlefield 3 was tested using FRAPS on Kharg Island during a full 64 man game of conquest on the same server. I did my best to ensure I fought in the same flags during each test to minimize variables. I tested 10 minutes of gameplay spending  time spotting aircraft, driving vehicles, as well as engaged in small and large scale ground fights. 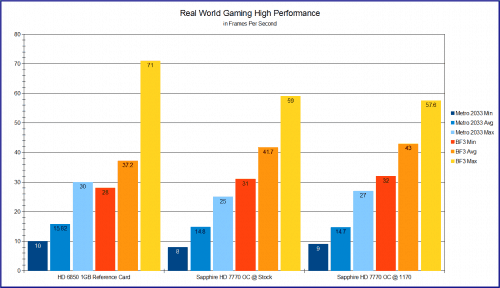 I was not surprised to see performance improve when switching from Metro 2033 to Battlefield 3 as Metro is notorious for its demanding game engine. I was shocked to see how much the modern engine of BF3 does improve performance on the same hardware. As you can see, the Sapphire HD 7770 has a higher average and minimum frame rate, but loses a lot of ground in maximum frame rate.

I also noticed during gameplay that the HD 7770 played much smoother. As noted earlier, the minimum framerates are higher which can lead to a much more fluid gaming experience. The 960 Streaming cores of the 6850 can produce more frames per second, but can’t maintain it when incidental graphical demands come into play. This includes explosions, fire, smoke, movement of other player sprites, etc. One has to wonder if the clock speed may be the limiting factor for the older card.

While the HD 7770 only has 640 Streaming cores, the near 400 MHz clock speed advantage seems to make up for this short coming. It could also be a clear sign the new GCN architecture is simply more powerful per core.

Lets take a look at how the Sapphire HD 7770 performances doing something other than 3D gaming. In this test I took an H.264 720p five minute video and converted it to be resized and playable on an iPhone 4 mobile device. This test was done using the built in presets and full hardware acceleration. 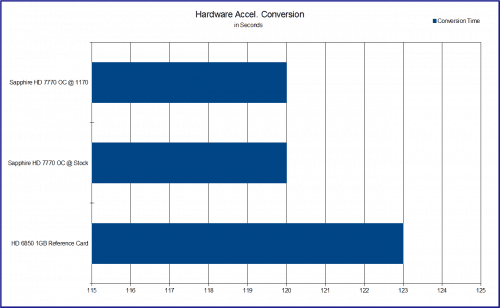 Now let’s look at some other factors that affect the overall performance of the card like power consumption, cooling, and then we’ll take this review on home.