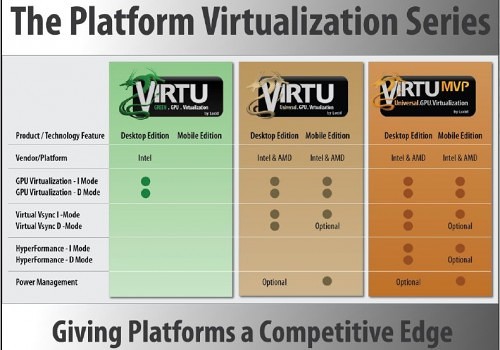 Over the last couple weeks, I’ve been neck deep in heavy Intel Z77 motherboard testing. I’ve been scrutinizing every last feature, and weighing each board’s performance potential. One of the Intel Z77 platform features I’ve been testing is Lucid’s Virtu MVP which could be the best Intel processor supporting feature in the last five years because it allows you to enhance not only your GPUs performance, but it also makes your games look better to0. But there’s a small issue: It disables Intel’s own QuickSync feature in certain circumstances.

LUCID Virtu In a Nutshell 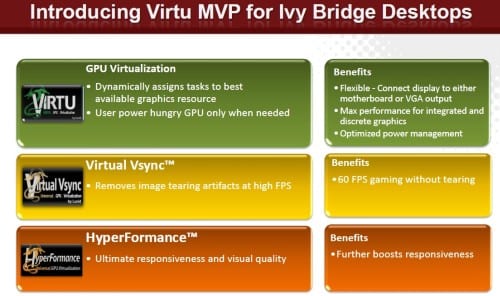 Today’s new Lucid Virtu MVP has a very similar mission. Teaming up the new Intel Ivy Bridge CPU integrated HD4000 graphics processor and a discreet single GPU video card will give you better frame rates similar to what AMD has provided in their Hybrid CrossFire, but without having to use specific GPUs. Along with the Virtual Vsync technology, the technology smooths over vertical Sync tearing too, making your games look better. Not only can you can also still encode at the “speed of cache” while gaining much needed frames, but you can also continue to FRAG at a reasonable frame rate. In fact,  average frames are about a 10 fps gain in DirectX11 games and about 20 fps gain in many DirectX9 and DirectX10 games.

While 90% of the single GPU users on the market will enjoy this technology without issue, enthusiasts and professional users with dual GPUs will not be unable to use Lucid Virtu and Lucid Virtu MVP as they are not compatible. Even disabling one of the GPUs would not allow the technology to work.

Any Fixes In Sight?

We recently talked with Lucid to see if there were any plans to update Lucid Virtu MVP since dual GPU consumers also buy Intel Sandy Bridge and Ivy Bridge processors for the IGP features with Intel Quick Sync being among them. We pointed out that not all users can afford expensive software that is capable of utilizing the power of multiple GPUs. Users could also feel a little like they’re being punished and/or left out simply for choosing to use two discrete GPUs in their system. Granted, we don’t need MVP support but why disable Intel Quick Sync?

Lucid confirmed that they had no immediate plans to update Virtu MVP due to the small percentage of dual GPU users and more importantly, because motherboard manufacturers aren’t interested in the cost of licensing that new feature update. However, future Virtu MVP software will provide all users with a new level of customization that supports Intel Quick Sync and its performance benefits. Unfortunately, we probably won’t see this feature update till the next processor refresh from Intel in about a year or so.

The bottom line here is that not having access to key CPU features seems like value lost.