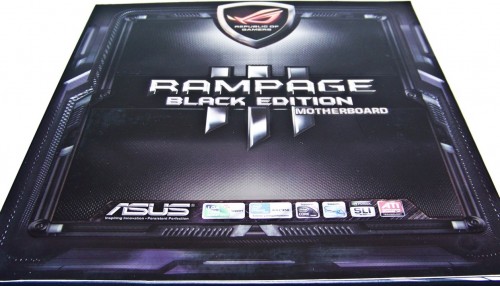 Everyone should understand by now that ROG (Republic of Gamers) series products cater to two types of enthusiasts which includes extreme overclockers and hardcore gamers who want the fastest, best tuned ASUS products money can buy. Not only does the series offer the most robust features, they also offer their best in terms of software when you get right down to it. The ASUS Rampage III Extreme Black Edition motherboard is no exception. This is not an entry level motherboard with a pretty face. What you will find is a highly tuned Swan Song to the X58 platform boasting a BIOS overclocking enthusiasts demand along with full speed quad-PCI Express that supports the most power hungry video cards on the planet. Entry level users, beware. This board may both amaze and intimidate you! Allow me show you what we’re talking about. 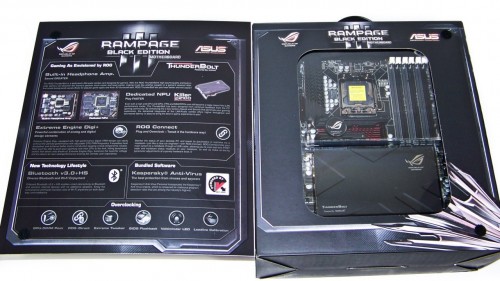 The Rampage III Extreme Black Edition (BE) sports a magnificent red on black theme that can’t be mistaken for anything else. If the ROG LED badge doesn’t clue you in to what you’re looking at, the visible features will. Gamers will enjoy having four AMD CrossfireX and NVIDIA SLI friendly PCI Express 2.0 slots for setting crazy records or video perfection. The platform makes this possible but requires one extra power connector to feed extremely power hungry video cards. Overclockers have the BIOS, software and onboard tools to drain every last ounce of their LGA 1366 processor whether cooling with air, water or liquid nitrogen. 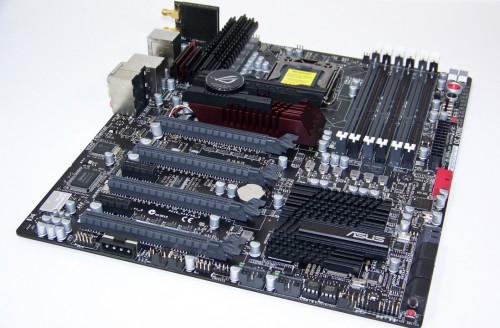 The only competing X58 motherboard that targets the gamer market is the GIGABYTE G1 Killer Assassin. While the Assassin integrates all of the features gamers need, the Rampage III BE includes a Thunder Bolt card that contains a Killer NIC and Xonar audio on top of the integrated Creative Labs X-Fi audio processor. The Killer NIC gives your games’ network traffic priority over anything else in the Windows stack. The Xonar Audio audio is extremely clean and pairs very, very well with high end 150 ohm or higher audio headsets. The cool thing about the Thunder Bolt card is that it can be used on another system.

ASUS claims that it’s something that adds value because you can take it with you to your next system. While you can’t do this with the Assassin, it’s quite rare to want to take something like this with you since your latest and greatest upgrade board may have something even better onboard.

If you don’t use the included Thunderboard card, you’ll find the integrated Creative Labs X-Fi audio quality to be much better than other solutions. 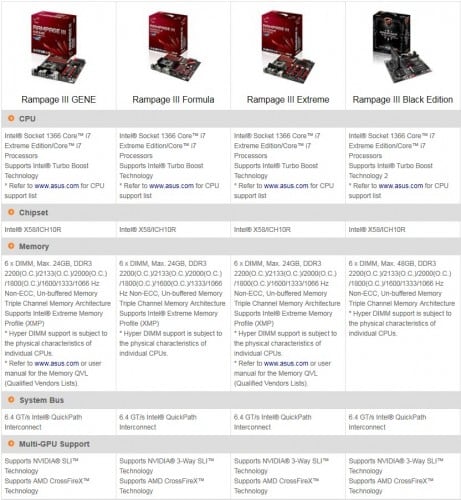 That brings us to pricing. Originally, the board fetched a near $600 premium but has slowly dropped to about $529.99 US/CA depending on your online source. And since this is likely the last kick at the X58 can, which is still one killer platform, it may be even lower.  This makes the Rampage III Black Edition extremely competitive and within shooting distance of the G1.Killer Assassin and other premium boards. With the extra Thunderbolt card and WiFi/Bluetooth connectivity, the features alone may win the day if you find value in them. 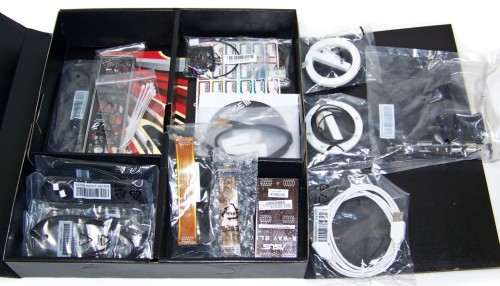 The ASUS Rampage III Extreme Black Edition definitely packs in a lot in the box. First off, you’ll get all the SLI and CrossFireX bridges you’ll need to max out all the slots. You’ll also find zip ties and labels for all your cabling, stickers for the side of your case and premium quality SATA cables to go with the bundle. These are pretty standard for most ROG boards in the series. There is also a break out bracket for the rear for additional USB connectivity as well as the ROG connect cable that allows you to tune your machine using a separate notebook. Just like you would when you tune the engine of your car.

Since this board also offers both WiFi and Bluetooth onboard, you’ll get antennas for those too denoted by the circular white things in the shot above. ASUS has pretty much given you everything you need to build a system right on the floor of a LAN party if you wanted to. 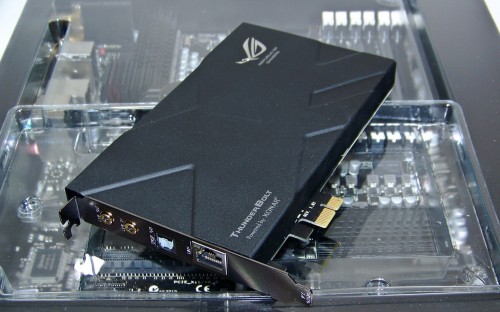 The most interesting part of the bundle is of course the Thunderbolt card which consists of both your premium audio and E2100 gaming NIC. As mentioned earlier, ASUS believes that the value proposition of this card is that you can take it and put it in any system you wish. That means if you upgrade, you can put that in your new system. Some may find value in that, but for most, everything that typically came with the system, goes with the system when we sell it or the board for an upgrade. Let’s talk about the E2100 a bit more on the next page.