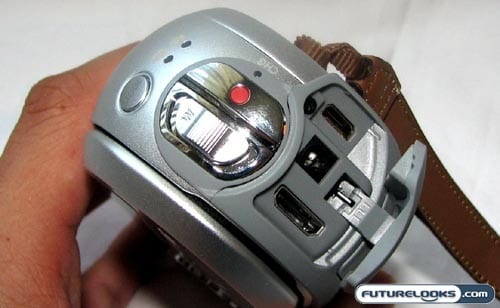 Around the back, below the record button and zoom rocker, is another latch that opens up to reveal another set of ports. The far-left port is for the mini-HDMI cable, the center one is for the AC charger, and the one on the right is for a USB connection.

On a side note, there is a definite “squishy” feel to the record button. It doesn’t really click in and click out like a regular button, making for a strange tactile experience. This also means that it isn’t always immediately clear whether it registered your pressing of the button. Thankfully, an alternate record button is located on the flip-out LCD portion. 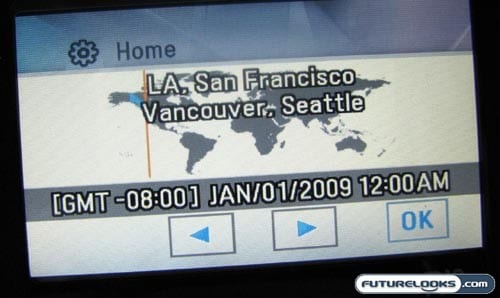 The remarkably compact HMX-R10 doesn’t have a lot in terms of buttons, but that’s because most of your interface will be through the 2.7-inch touchscreen LCD. You’ll be able to hit the record button and adjust your zoom using the physical controls, but all the configuration options are done through the touchscreen menu.

The first time you turn it on, you’ll be asked to enter the date, time, time zone, and other basic information. Beyond that, the main menu lets you adjust the resolution, activate slow motion mode (up to 600fps, but no sound), change the white balance settings, set the aperture and shutter, turn on the face detection, and so forth.

Everything is reasonably intuitive, but know that this goes well beyond the “options” that you get with a Flip pocket camcorder. Even though it’s quite small, the R10 comes with a lot of options and features. The on-screen virtual buttons are big enough to be finger-friendly, so that’s a plus.

Yes, It Takes Still Photos Too 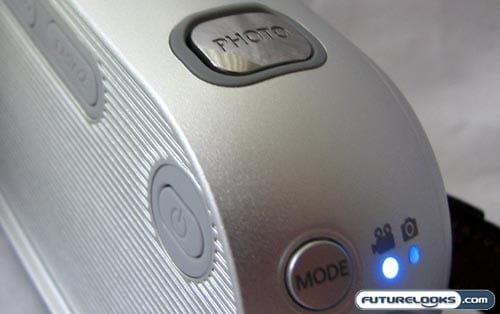 These days, even the cheapest digital cameras have the capability of recording video, so it would only make sense if camcorders could do the same in reverse.

While some other camcorders force you to switch modes if you want to shoot still pictures, the R10 comes with a handy “photo” button on the top. When you are in video mode, you can hit this button for a quick snapshot using the current photo settings. That’s convenient. Speaking of handy, I also like how the camcorder automatically turns on when you flip out the LCD screen. There’s no other reason why you’d open it up, right?

Easily the most noticeable feature on this camcorder is the unique approach that Samsung took with the lens. Pointing 25-degrees toward the skies, the idea is that you don’t have to hold the camcorder on a horizontal plane to shoot straight ahead. This is supposed to be more comfortable. In practice, I found it to be a little disorienting, but this is mostly because it’s so new and different. 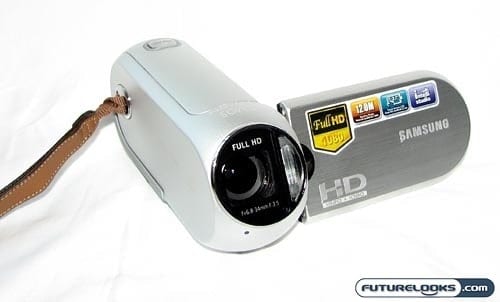 I would agree that the hand and wrist position is more comfortable, but without looking right at the LCD screen, which can rotate at will, I found that I was misframing a lot of shots. When you try to shoot a video over a crowd, you’re trying to shoot downward rather than straight ahead. The “comfortable” angle of your hand really comes in handy, no pun intended, in this kind of scenario.

There is at least one very important thing missing from this video-recording package: a lens cover. In an effort to keep everything looking as sleek as possible, Samsung failed to include a proper lens cover. It’s far too easy to get a fingerprint or some other mark on the lens, ruining all of your videos and pictures.