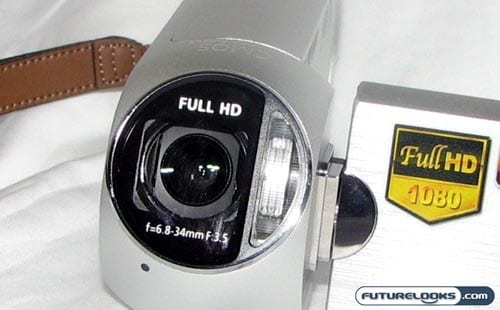 Earlier this year, I had the opportunity to meet with Samsung at the Consumer Electronics Show in Las Vegas. One of the more unique products that I was shown was none other than the Samsung HMX-R10. The specs make it sound like any number of other HD digital camcorders, but this thing does at least one thing differently.

Some people dubbed it the Alien Eye, because the lens of the HMX-R10 does not point directly forward like all other camcorders and even Samsung’s on previous models. Instead, it is angled upwards, because this is supposed to provide for a more comfortable shooting position for your hand and wrist. And it also happens to be the world’s smallest full 1080p HD camcorder to boot.

While you could certainly take the easy route with something like the Flip Video UltraHD pocket camcorder, you get a much more robust and feature-rich experience with the Samsung HMX-R10. 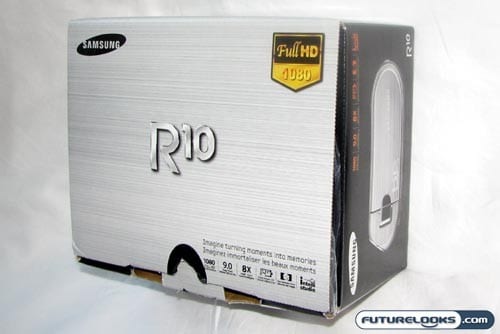 For starters, the Flip UltraHD can only do 720p, whereas the Samsung HMX-R10 can bump that up to Full-HD (1920 x 1080), giving you “superior clarity and increased depth of detail.” The CMOS sensor is also able to capture still photos at up to 12 megapixels of resolution. 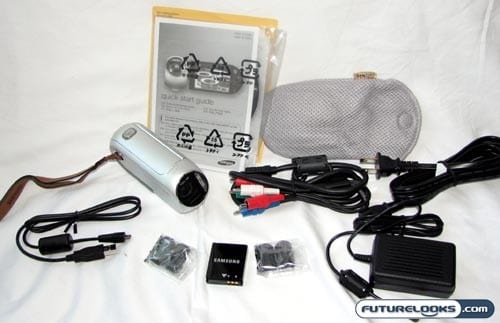 While the bundled accessories aren’t exactly comprehensive, you do get a healthy complement of supporting items when you unpack the Samsung HMX-R10 digital camcorder from its neatly-designed box.

It is a bit of a curiosity that Samsung would choose to include a component video cable for direct video output on the R10. Yes, the other end of the cable uses mini-HDMI so that it will work with this camcorder, but wouldn’t it be so much nicer if they included a true mini-HDMI cable instead? That would make for a better HDTV-viewing experience for sure.

You’ll also notice that the HMX-R10 does not have any internal storage memory and Samsung did not include any free SD memory cards to get you started. In this way, you’ll want to grab an (extra large) SDHC card while you’re at the store picking up this camcorder.

Pop the Hatch for Battery and Memory

Since you’ll need to rely on your own SD and SDHC memory cards with this camcorder, it makes sense that there would be some place where you would insert said cards. For the HMX-R10, the hatch for the memory cards is also the same hatch where you’d access the battery compartment. 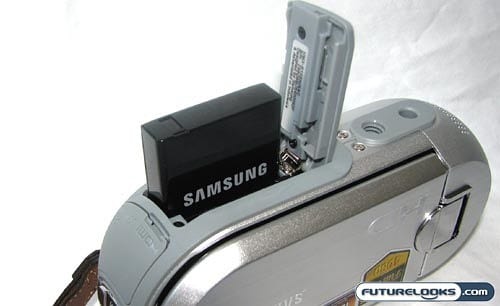 Rather than using a spring-loaded mechanism for opening this latch, which is located on the underside of the camcorder, Samsung opted for a lock/unlock switch. It’s not really any better or any worse, but it’s a little unconventional. Personally, I would have preferred if the SD slot was on the side or the back, since this is usually easier to access than the bottom, especially if you are using a tripod mount of some kind.