I own a third-generation iPod nano, which happens to be the first generation where Apple decided to include video playback capabilities in a nano. That’s all well and good, but the screen is very small and I really can’t watch anything more than a couple minutes long before I get frustrated. Even when you watch videos on an iPhone, the screen is nowhere close to what you’d get sitting in your home theater or even in front of your laptop. 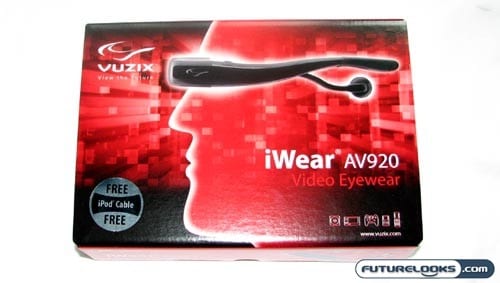 Wouldn’t it be nice if you could have the big screen experience while on the go? While it may immediately solicit memories of Cyclops from X-Men or Geordi La Forge from Star Trek: The Next Generation, the Vuzix iWear AV920 is actually a set of video glasses. Well, glasses might not be quite the right term.

The AV920’s are officially marketed as video eyewear. The idea is that you can get a wearable virtual big screen no matter where you find yourself like in the cramped quarters of an airplane. Does it deliver as promised? Let’s find out!

A Giant Television on Your Head 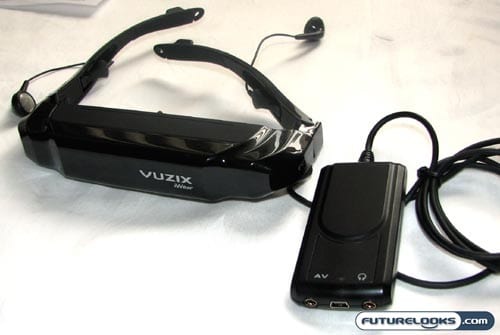 It may be able to fit in your pants pocket, but the iWear AV920 is said to offer a virtual experience equivalent to a 65-inch screen when viewed from nine feet away. This is because the twin displays are only about an inch or two away from your eyes, giving you the impression that you are looking at a much larger screen. It’s not HDTV, but it’s supposed to feel huge.

Going through the rest of the features, you’ll discover the following:

Going even further, this portable video eyewear set also comes with the ability to provide enhanced 3D imagery, so long as the video feed has been set up to do so.

Contents of the Box

Since this video visor is supposed to work with a variety of different devices and since it’s supposed to be as portable and user-friendly as possible, it’s not surprising that Vuzix decided to bundle quite a few accessories into the box. 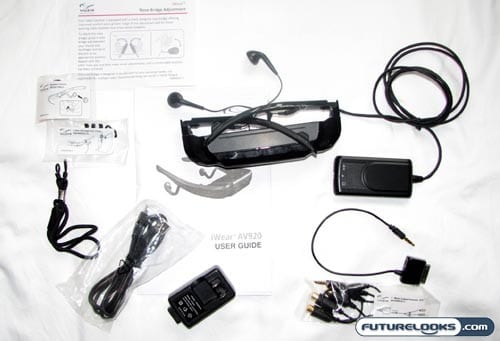 Aside from the iWear AV920 itself, you get a lens cleaning carrying pouch, a headstrap, a composite AV cable for iPod, a composite audio/video cable (RCA), a travel charger, a mini-USB cable, and supporting documentation.

You’ll also notice that there are a couple of things directly attached to the video visor. You get the earphones that are embedded into the frame, lining up quite well with where you ears would be. There’s also the wired adapter that swings out the side. This is where you would attach your input device.