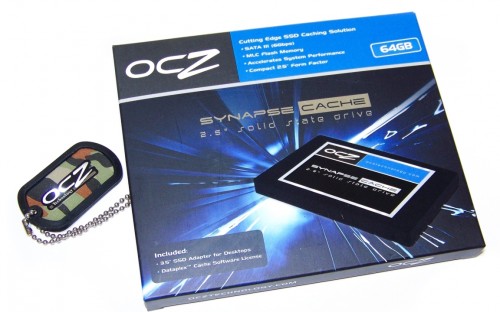 For those that don’t know, SSD caching (Intel Smart Response) is a feature built in to Intel Z68 Sandy Bridge motherboards where you can add a smaller volume SSD to your existing platter based hard drive to increase overall system performance. Users often experience a quicker more responsive system after doing this. That’s great if you have a Z68 system and don’t want to spend $200 on a new SSD to speed things up. But, what about users who don’t have an Intel Z68 based system?

OCZ has a new product called the Synapse Cache SSD. This line of products provides SSD caching on any system including AMD and or any Intel motherboard that does not have Intel Smart Response built in. The best part is that you don’t have to reinstall the operating system which really makes the upgrade process easy. The questions is, does it perform? Let’s find out! 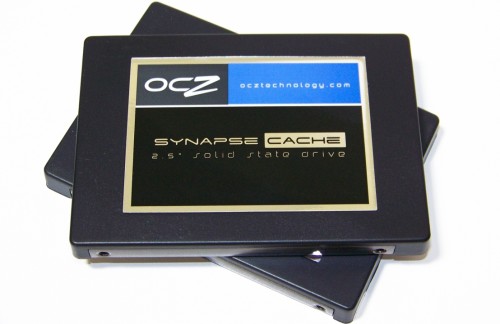 OCZ’s Synapse Cache SSD uses MLC NAND Flash in two different sizes: A 64GB and a 128GB model. Both of these specially prepared SSDs are supported by the included Dataplex software whereas Intel Smart Response both motherboard and software to work. Unlike the Intel technology, the Synapse Cache can us more than 64GB for caching. The series naturally offers native TRIM support, ECC recovery as well as data encryption.

Looking at the 64GB model, max read data rates are up to 550 MB/s while max write data rates level up to 490 MB/s. The 128GB model offers max read up to 550 MB/s and write up to 510 MB/s. These transfer rates are very similar to OCZ’s flag ship Vertex 3 SSD because both utilize the current SandForce SF-2200 series controller and SATA3 interface.

Finally, we come to the pricing of the series. The Synapse Cache 64GB SSD costs $154.99 and the 128GB SSD costs up to $254.99 US/CA respectively. These are priced just a little higher than most SSDs on the market, but are anything but regular SSDs as we’ll find out soon enough. 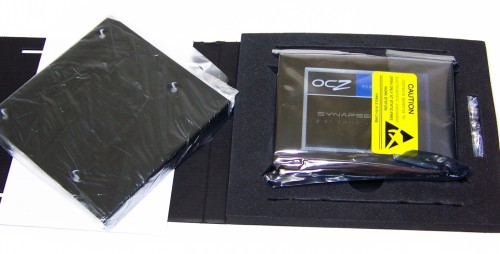 The Synapse Cache SSD bundle is pretty simple when you get down to it. But then, so are 90% of most the SSDs available on the market. Inside the box is a well padded container which protects the SSD, adapter drive plate and Dataplex software disc. Since most folks have plenty of left over SSD data cables in their motherboard box, I can partially over look not including one. However, cables are as cheap as fifty cents these days and it wouldn’t hurt for every manufacturer to include one just in case. Especially since this product will likely be used as an upgrade rather than as a part of a new build.

The most important items are your SSD which has the Dataplex software key sticker near the back and the software disc. If you happen to lose your disc, it can also be found online. But, do not lose your key sticker. 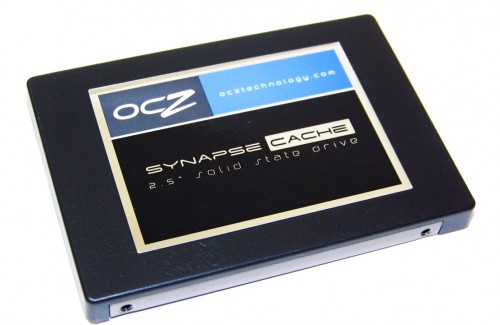 The OCZ Synapse’s purpose is to provide an easy cache performance upgrade to any system where the user doesn’t want to worry about having to buy a costlier new CPU and Z68 motherboard or even worry about reinstalling the OS on a new SSD. This is especially great when things are still running so smoothly on the system today. It can be a really big inconvenience to have to reinstall an OS. It’s far easier just to add the Synapse.

Caching easily increases system responsiveness especially if you’re regularly loading large programs for things like video editing or even large games. While it doesn’t increase a gaming system’s frame rates, it does cut down game load times. The questions that need answering are whether or not Synapse really works on any current chipset, how fast is it and just how fast is Dataplex versus Intel Smart Response performance. Let’s get to it!

Setting Up the Test System

Synapse works fine on any Intel Z68 platform even when using Intel Rapid Storage Technology software. However, IRST shouldn’t be installed when using OCZ’s Dataplex software. I also tested Synapse on an ASUS Sabertooth P67, GIGABYTE G1 Killer Assassin and GIGABYTE GA-P55A-UD6 motherboards with similar results. In fact, the scores were also all very similar in PCMark7 tests. Let’s get to installation and scores. 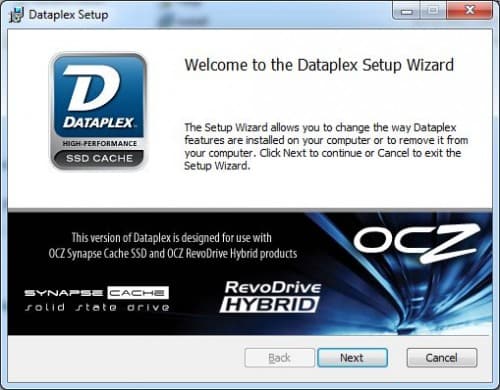 You install a Synapse Cache SSD in the same SATA port series as your primary OS hard drive. For example, both should be in SATA2 or SATA3 ports. Also, the system’s SATA storage BIOS option should be set to RAID. If it isn’t, Windows may encounter a blue screen because there’s no driver loaded and the registry is not set up. If this happens, use this Microsoft RAID Fix. Finally, you can install OCZ’s Datacache software which pretty much walks itself through to till it’s complete. 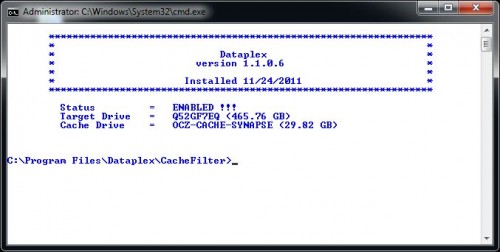 The installation process was the same and successful on all four test systems regardless of their chipsets. I checked to make sure it was running properly each time. Now that we know that it works, the real question now is just what kind of engine is under the hood and whether or not Dataplex is better than Intel Smart Response. Let’s find out.