CrystalDiskMark – Comparing the Synapse against a Patriot Pyro 120GB

To get a better idea as to design of the Synapse SSD, I compared it to a Patriot Pyro 64GB which uses Asynchronous NAND and SandForce SF-2281 controller as well. This benchmark uses intense data compression which gives an unusually more accurate estimate as to the real world transfer rate average. 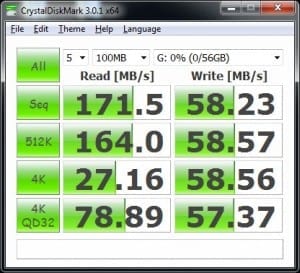 Using the 100MB test setting, we see there’s almost a 60MB/s write average possible with the Pyro 64GB SATA3 SSD. That’s a good chunk of consistent data transfer and quite a bit more than a average SATA2 SSD. 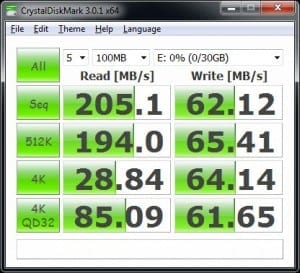 While the sequential and 512K scores are about 30MB/s difference, it’s the 4K that really influences overall system characteristics like boot and program access times. The better tuned 4K data should influence other benchmark scores as well. Let’s look at PCMark7.

PCMark7 is a benchmark which tests a computer’s full range of component and peripheral resources which includes computation, video, web, storage and even 3D performance. Data transfer rates heavily impact the benchmarks overall performance and we ran it three times to give the caching a chance to get settled. If you compare the non-cache and Dataplex score details, you can see how it caching effects the system excluding storage which wouldn’t be very high due to the SATA2 platter drive. 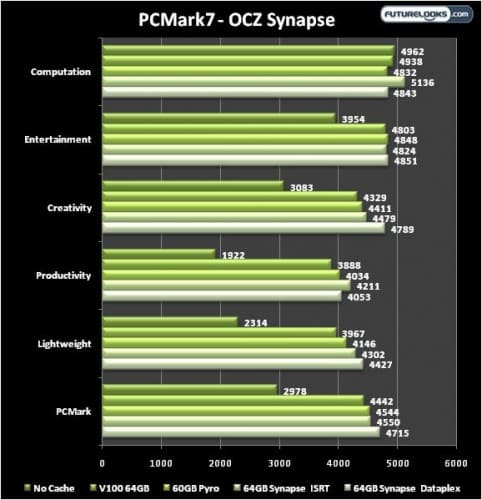 As you can see above, caching is very beneficial to overall system performance. Interestingly, the Synapse did better in Computation and Productivity when controlled by Intel Rapid Storage drivers. Otherwise, the Pyro and Synapse both offered comparable performance since both are SATA3 SandForce 2281 controlled SSDs. Both incidentally also scored similarly in CrystalDiskMark bandwidth tests.

However, Dataplex obviously does a better job of managing the Synapse SSD. The overall score is very clear evidence. It’s quite possible that a little more software tuning could further improve Synapse’s overall performance. That would increase overall performance again possibly further sealing the deal for the purchase of one of these easy to drop in upgrades. 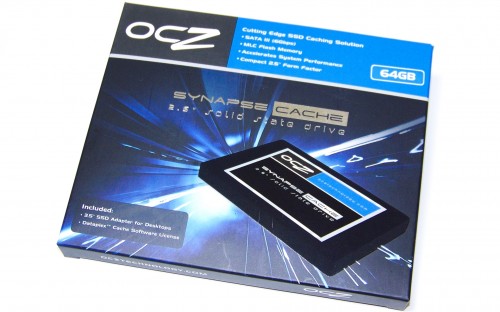 OCZ’s Synapse Cache solid state drives work quite well at offering a relatively important performance increase to non-Z68 motherboards. Users will see quicker program load and execution thanks to its fast caching feature. This is also achieved without formatting the existing hard drive, reinstalling the OS or having to buy a new system just to get the increased performance. While the installation process is a bit simpler to set up than Intel Rapid Storage, Dataplex is also faster than a Z68 chipset when it comes to overall performance. That is the heart of Synapse’s value proposition which seems to be better performance for any system.

OCZ’s Synapse Cache SSD product is meant for users who want a cheaper, no-fuss SSD caching alternative to a full system upgrade or even an OS re-installation on a new SSD. Synapse’s performance and cost probably won’t appeal to current Intel Z68 system owners or users that want a full sized SSD to hold their OS. That said,  the cost of the 64GB Synapse is $154.99 and 128GB $254.99 are not comparable to pricing for similar sized SSDs. The Z68 friendly Agility 3 60GB SATA3 SSD starts at $89.99 and puts more perspective on what you’re paying for: The Dataplex software.

If you have an older system that could use a performance kick in the pants, I recommend the fastest, easiest implementable performance caching solution available. And that solution today is the OCZ Synapse Cache. It is exactly what the doctor ordered for that old but still bitchin’ X58 system or any other system that doesn’t have Intel’s Smart Response technology built in.