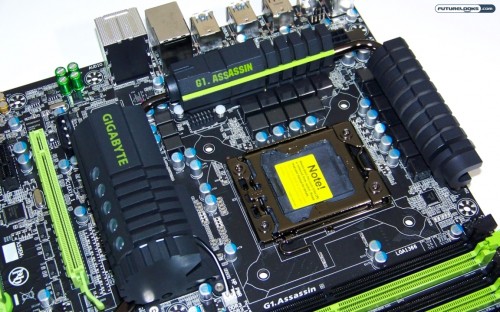 If you try to please everyone with a product, then you won’t please anyone at all. And that seems to be the case with many motherboards on the market. Boards that combine gaming stability with features that overclockers want end up with an identity crisis. Monikers like ASUS’ ROG tend to fall into this category as gamers are not necessarily overclockers and vice versa. In fact, go to any LAN party and you’ll find out quickly that true gamers prefer stability over all else. Things that overclocking tends to push the limits of. This is why GIGABYTE’s new G1-Killer series is so interesting.

The GIGABYTE G1-Killer Assassin is an INTEL X58 motherboard that is targeted towards the most hardcore gamers. In addition to new cosmetics that attract these users, the board also brings forth many features that gamers find very important.

GIGABYTE has really done their research on gamers with this board and have managed to bring all the most important things that matter to gamers into one unique product. Here we take you through many of those features including what you get with it in the video walk through below.

As you can see in the video above, the layout of GIGABYTE’s top of the line G1-Assassin harbours features very much geared towards gamers. From the enhanced audio (Super Hearing) featuring Creative Labs CA20K2 Sound Blaster X-Fi digital processor to the board’s “Super Sight” which gives a nod to the boards 4-way ATI CrossfireX and 3-way NVidia via the four PCI Express 2.0 slots, this board is all about enhancing the gaming experience. The best quality sound allows you to hear your opponent well while the best possible frame rates ensure smooth game play whether you are an nVidia or an AMD fan.

Finally, the E2100 NPU (network processing unit), which utilizes 128MB integrated Samsung DDR2 memory (not 1GB as on GIGABYTE”s website) give gamers full control over their net traffic via the Killer Network Manager. More on how this benefits gamers a bit later. 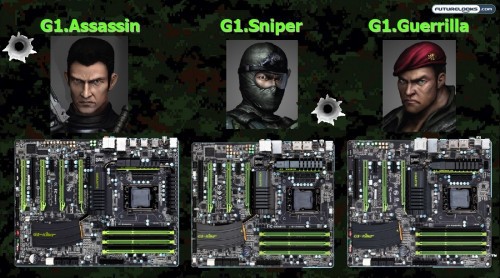 There are a trio of boards in this G1-Killer battalion. While there are many similarities, the main differences between the Assassin, Sniper, and Guerrilla are the number of supported PCIe graphics slots, audio processors, and CPU phase power. For example, the Assassin has 16 Phase while the other two have 8 Phase. More then enough for gamers that don’t want to or choose not to overclock their gaming systems. The chart below breaks it down further. 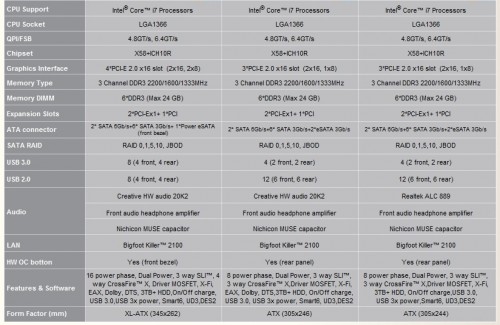 The Guerrilla is the only board that lacks the X-Fi audio which is kind of shame. But, it’s also quite a bit cheaper than the other two and still includes Creative emulation software to unlock some of the Realtek ALC892 codec’s hidden potential. Also, the G1 Assassin is the only one that uses the extended length ATX, or XL-ATX form factor. It’s about 1.5″ longer than standard ATX which means you will need a longer case to support it. The G1 Assassin product page contains a list of known compatible case.

Locating the G1 Killer series at retailers is going to require some patience. There is limited stock at the moment, but places like Newegg do get them in  on a regular basis. The G1 Assassin retails for $529 USD, with the G1 Sniper at $449, and the G1 Guerrilla rounding up the series at $349 USD.