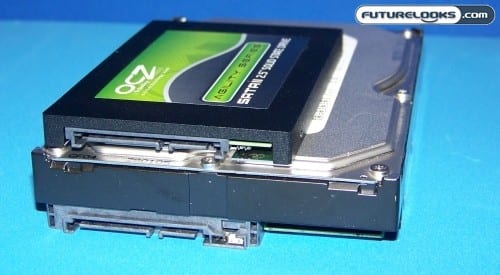 Installing an SSD on anyone of the latest AMD or Intel systems is as easy as connecting the power and data cable. If you have SATA drives installed now, then you’re all set. Otherwise, there’s a huge chance you have a few SATA data cables inside your motherboard box. Other than that, you’ll install the Operating System (Windows 7! Windows 7!) like you would normally. No special drivers needed at all.

Here is the test system details:

We’re including as many SSDs based on their different controllers in our possession to offer as large a comparison as possible. Sorry, we don’t have any official Intel SSDs to add to the mix but hopefully we’ll be coming by one soon. Otherwise, this range of controlres should add  to our nice little round up of benchmarks. 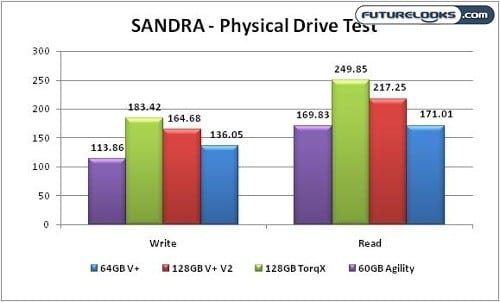 Right away, you can see the Agility isn’t far from matching the closet capacity SSD, the 64GB V-Plus. Both are considered mainstream. The difference here is that the Agility uses a different breed of Indilinx controller and the V-Plus 64GB uses a Samsung controller. 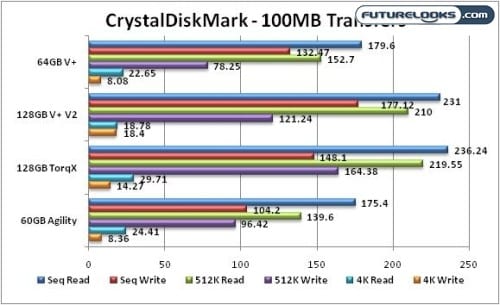 While the pricier Toshiba and Indilinx controlled drives are obviously fast, the Agility does a better job of moving 4KB data compared to the more expensive 64GB V-Plus. As you know, 4KB data makes up the bulk of desktop files which comes in handy. 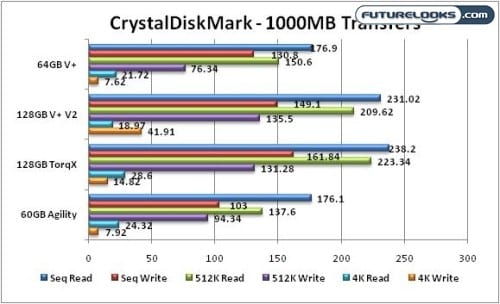 The reason some SSDs slow down during the 1000MB tests is because the 4KB data blocks take longer and tend to bog down the controllers. If any of these numbers seem slow to you, try running this free benchmark on your regular SATA I, or II drive. Otherwise, you can see that the Agility’s Indilinx controller does just a bit better job than the 64GB V-Plus and its Samsung controller. 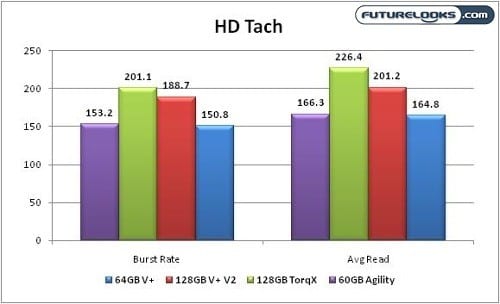 Essentially, we get a peak at each of the SSD’s corresponding controllers which make all the difference. The far more expensive SSDs with faster controllers are in a different league. Otherwise, it’s a very close battle between the 64GB V-Plus and Agility. Test after test, the averages were pretty much the same with neither backing down.