AMD has been quiet for a little bit as INTEL rolled out their Z68 Series Boards. But now it’s time for AMD to make a little noise of their own. GIGABYTE’s Colin Brix takes us through their new AMD 990FX motherboards which supports all of Bulldozer’s 8-Cores on the new AM3+ socket. We talk specifically about their GA-990FXA-UD7 and the new GA-A75-UD4H Llano platform based on the L2 socket and A75 processor.

While there was no specific mention of an OC Edition or G1-Killer edition of the 990FX, we’d have to imagine that GIGABYTE is already thinking about a way to bring the price of their gaming focused G1’s down in price. They already showed off a Z68 version (video coming) that is already in the Sub $300 ballpark. With AMD 990FX boards hitting the $199 price range, it’d be really nice to see what they could do with it and if you really want this to happen, you need to leave a comment here, on our YouTube, Twitter, or Facebook. GIGABYTE is listening very closely to the feedback. 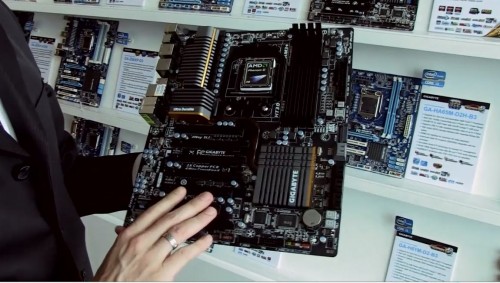 Stay tuned for more COMPUTEX 2011 coverage and our look at the NEW GIGABYTE INTEL boards coming up really soon!