In this benchmark, only the 64GB V+ and 60GB Agility were paired up since they are the closest competing capacity drives we have on hand. Plus, we can take a look at how controllers handle the loaded beat down.

Above are the results of the 64GB V+ with the Samsung controller. You can see that rates are pretty steady when the drive is empty. But, for whatever reason (probably due to the lack of TRIM), the Seq Write lost almost 20MB/s in performance. A firmware roll back only allowed it to gain back 6 MB/s which isn't much.

Now we get a look at the Agility and how much better it fares with the Indilinx controller. Sequential rates drop about 10MB/s where as the Random rates pretty much didn't change at all. We expect there to always be a performance hit as an SSD, or HDD for that matter, start to fill up. But, SSDs do much better with TRIM support. 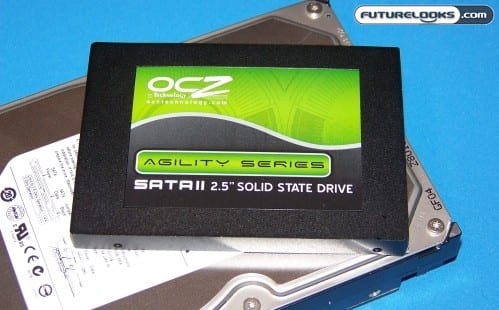 The OCZ Agility's performance isn't the slowest we've seen. In fact, while it bounces back and forth between the 64GB V-Plus at the start, it's in the loaded state that it thrives. When the Agility and the 64GB V+ SSD's respective controllers are taxed at about 80% capacity, the Agility is able to produce better transfer rates consistently. The Kingston V+ with the Samsung controller just isn't as nimble managing the data pages as efficiently as the Agility. That's mainly thanks to its spirited little Indilinx controller supported by 64MB cache. Plus, the Agility's Indilinx controller does have the added benefit of TRIM which Samsung does not. That alone should sway your decision in favor of the Agility.

After the fat is "TRIM'd" away, we see the Agility in its true light. Its Indilinx powered, has TRIM support, and it's priced similar to other performing 60 to 64GB competitors. Also, if you look carefully, you'll see the competition doesn't offer that all important TRIM feature. Plainly said, this is what a boot drive should be!