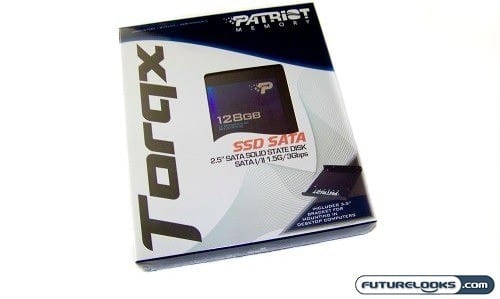 In the last couple of years, Solid State Disks or SSDs have become more prevalent in the marketplace. The prospect of owning was but a dream for most mere mortals not only in terms of price, but also in terms of availability. Today there are multiple vendors, supply is somewhat decent, and everyone is starting to work their marketing magic to strategically price their products. With this added competition, drives are getting cheaper, faster and most important larger.

A little while ago, we had a great hands-on experience with the  Kingston 128GB V-Series Solid State Drive; an entry level SSD that gave us a usable amount of storage and better than hard disk performance. Most importantly, it was affordable. Today we’ll be checking out something from the folks at Patriot Memory that takes the technology to another level. The new TorqX series is Patriot’s answer to the performance challenge. In this review you’re going to see why we’re dubbing this one a “torque monster”. 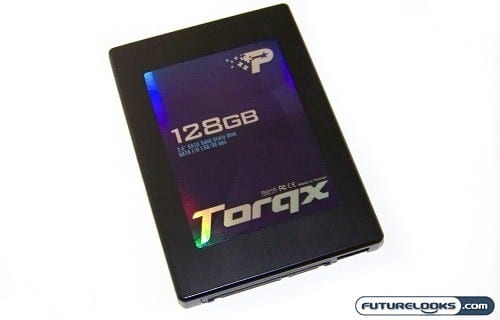 The important thing to keep in mind here is that the TorqX Series has been designed for sheer maximum performance as its specs show. The drive is made with Patriot’s best Extreme Flash NAND which allows it to offer up to 260MB/s sequential read and 180 MB/s sequential write speeds. This performance is available in both the 128GB and 256GB models. The line is equipped with 64MB DRAM cache and uses the Indilinx 1DX110m00 controller which is one of the best currently available.

Patriot also offers a 64GB TorqX SSD built with similar NAND flash. Transfer rates are a bit lower clocking in at 220MB/s sequential read and 135 MB/s sequential write speeds but this might just be because it is a slightly older product. Typically, the larger drives tend to be the slightly slower ones due to the quantity of chips required to assemble each one. Despite that, the 64GB still measures up faster than most drives in its size and price point. Ultimately, it will come down to your motherboard’s host controller and how it interacts with the SSD controller if you want to see those big numbers.

As always, a few of the features that make SSD technology so promising is its durability for mission sensitive objectives. This means that whether your using one in a desktop or laptop computer or in a UAV (Unmaned Aerial Vechicle), you can expect it to get the job done from 0 to 70 Celsius. Since they have no moving parts like conventional hard drives, they can’t be affected by turbulence or evasive maneuvers.

Something that comes built in to the enitre TorqX SSD series that you can’t see is a 10 Year Warranty. This is the longest warranty ever offered by a manufacturer on any storage device. This is a testament to the quality and confidence Patriot has in to their TorqX series. This should put your minds to rest if you had any concerns about just how long these drives are expected to last. Our TorqX 128GB sample should hit the streets at around $360 US. 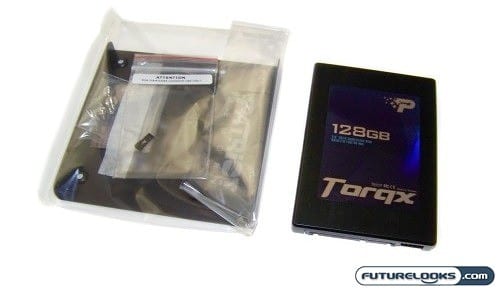 Patriot Memory provides a fairly bare bones bundle with the exception of a drive caddy, rather than a pair of drive rails in which to mount your sacred SSD. The solution provided is actually quite a bit more elegant than some of the ones we’ve come across. Instead of just being some bare piece of bent metal, Patriot decided to paint this thing black and throw their logo on it. We mentioned that we were a little disappointed with the 2.5 to 3.5 inch drive adapters that came with the Kingston SSD V-Series 128GB drive and we think it’s nice to see some thought go into this.

Also gracing the package is a basic installation manual and some screws in which to mount the drive to the adapter plate. There is no software or driver CD required as the drive is automatically recognized as just another SATA drive in your system. The little black jumper you see there is used for flashing the drive if the need ever arises to do so. Simply plug the jumper in to the SSD and begin the flash process.