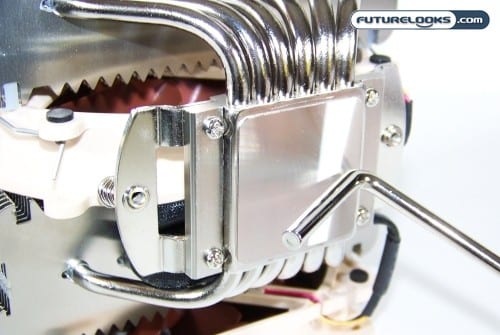 What you can’t quite see in the video is just how nice a base the NH-D14 sports. Those six lengthy heat pipes all pass right through the base. I held the Philips tool included in the installation kit right up to it for a reflection test. Though it’s not a perfect mirror finish, it’s perfectly smooth and absolutely flawless in shape.

One thing I did notice about the base is that it’s ever so slightly convex. It has a very slight rounded surface which means it should be able to fill in any disconnected spots on the processor’s integrated heat spreader (IHS). It’s not uncommon to see this on some processors. This can rob your CPU cooler of much needed performance due to the limited contact surface so it’s nice to see little touches like this included with the NH-D14.

I’ve pretty much tested and validated every mainstream, elite CPU cooler on the market using our flagship Intel Core i7-989XE processor so we’ll continue to use INTEL’s hexacore goodness for our testing. If anyone’s flagship cooler can cool this processor under full load, it clearly a front runner. You’ll just have to decide which one you want later on after measuring price, features and your eye for design.

Our test system will consist of the following components:

All the coolers were tested with the same ambient room temperature of 21C and were all kept in their stock configurations as intended by the manufacturer. Since some of them do feature dual fan configurations, I opted to test them as such using low, high, and BIOS PWM settings to compare. Arctic Silver 5 was applied identically for each cooler to make sure that everything was even across the board though as mentioned, the Noctua compound is quite excellent and may even buy you a couple more degrees. 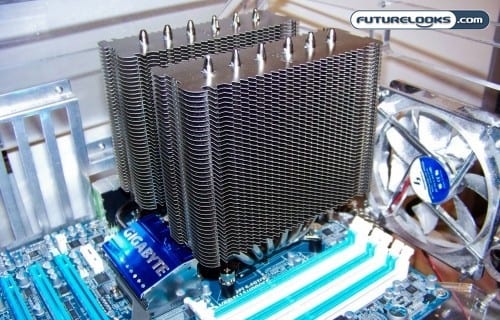 As we’ve mentioned in the video and emphasized along the way, this cooler is indeed massive so care must be taken when installing it onto your motherboard. It would not be wise to drop this thing as it could cause serious damage to the PCB of your very expensive motherboard. Also worth noting is the fact that due to the jagged edges and awkward shape, you should be very careful when handling it. We’ve gotten our fingers stuck in between some crevices and at least one of the crew has bled while installing this cooler.

One other thing to note here is that Noctua makes the installation so much easier by including their very awesome L Angle Philips screwdriver in the box. This tool is a time saver and makes it totally possible to install the cooler with only what is included in the box. The long handle also makes securing the cooler to the base plate very easy as the handle of some screwdrivers will bump into the tall towers once the screws are in all the way. We’re keeping this in our tool drawer now by the way. 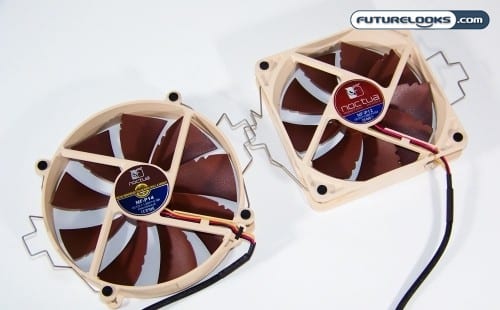 Finally, the fans are something that provide just as much detail and customization as the rest of the heatsink. The high quality fans are special in that no part is untouched to create low noise. From the special bearings, to the little saw edge winglets, these things are built to cool and quiet. They dismount easily for cleaning, but you also have the option of using one or both, but we chose to keep both installed as this is how the cooler is assembled at the factory. The only other thing you need to decide is whether to use one of the RPM limiting devices to further reduce noise to nothingness and even then Noctua has provided all the details like the Y-Cable to make that so.

Now that we’ve gone through what makes the Noctua NH-D14 special and how the user experience is with the assembly, it’s time to see how it performs!