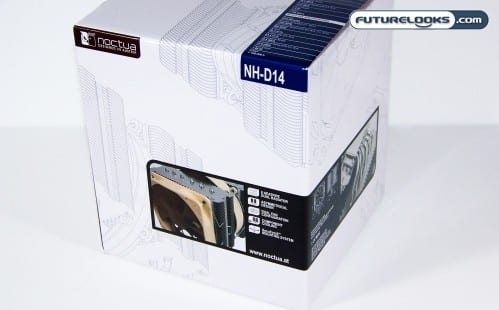 The Summer heat is still here and for folks not relaxing in the comfort of air conditioning it’s pretty darn rough. While gaming and surfing the web, a computer’s CPU cooler is working extra hard to keep your processor from shutting down or melting down. If you’re a gamer, chances are that very same CPU cooler is emitting a nice obnoxious whirring sound all day long. Fret not. Noctua has a beast of an air powered CPU cooler that was created specifically to subdue the hottest processors on the planet. It’s called the Noctua NH-D14 and we’ve got it on our test bench today.

The NH-D14 sports the latest in CPU cooler technology. We’re talking the best materials used to fabricate and assemble said cooler. It also happens to support all of the latest processors around. But, rather than explain it all in redundant details, check out our unboxing video on Futurelooks’ own YouTube Channel!

It’s really cool that Noctua includes decent, sturdy mounting hardware and everything you could possibly need to install the cooler. Their thermal paste is pretty decent as well. While I’m not sure if they make their own, it isn’t far off (if at any) from the Arctic Silver 5 stuff typically used on the test bench.

The Noctua NH-D14 CPU Cooler has been available for quite some time now and should be readily available for around $89.99US. This definitely puts this at the upper end of the cost spectrum. Considering that some of the very premium coolers on the market don’t even come with fans supplied and this cooler almost seems like a bargain. We’ll have to see if the performance justifies the price of course. 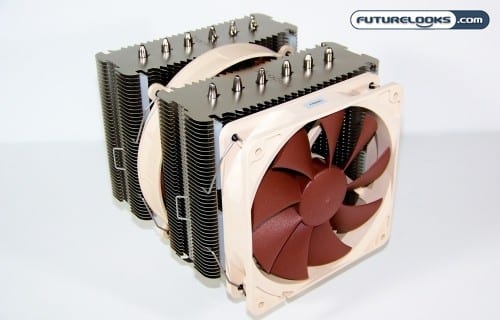 I would like to emphasize some of the more impressive features of the Noctua NH-D14. For starters the cooler sports six heat pipes that are about 14 inches long and stretch the entire length of the two massive twin radiators. While most massive tower coolers only sport one massive tower, this beast sports two. That adds some weight to the cooler and makes it weighs in at 1070 grams without the cooling fans attached. The size of the NH-D14 is both impressive and concerning though.

It’s massive dimensions mean that not all motherboards will support the cooler properly so it is best to measure before buying. Issues encountered could include bumping into surrounding heat sinks or memory modules. For example, the Patriot ViperII memory with the black flat tipped heat spreaders worked perfectly with the cooler but, my Kingston HyperX 2250MHz memory with the V1 heat spreaders were far too tall to fit under this behemoth. 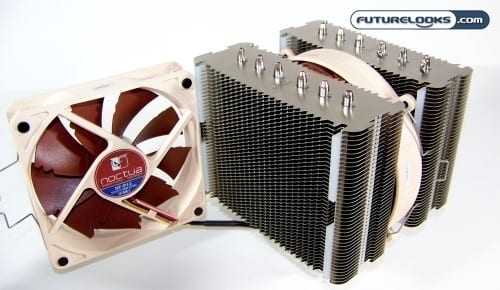 I like the fact that the cooling fans are rated at 900 to 1300 RPMs depending on the method of fan control. Users have the option of manual, PWM (BIOS monitored), and fan wire control. While using the BIOS settings is the easiest method, the 2 extra 3-pin Ultra Low Noise Adapaters take speed and noise control a step further. Noctua even includes a Y-Split cable to use with the ULNA wires.

To further reduce noise, they even include eight small Vibration Compensators which are basically white colored soft bumpers of sorts that are almost gel like that can indeed absorb fan vibrations. You can even relocate them as you see fit but the stock settings are pretty optimal. Taking it one step further, you can see that even the fan profiling with the little jagged edges are all geared towards the pursuit of quiet performance as is the slightly unconventional 120mm/140mm fan configuration.