It almost seems like yesterday that I started down the yellow brick road to technology with my first real office computer which had an Intel 80486DX2 Processor. A couple years later, the local PC store built me an “adequate” gaming computer using a Pentium III 750MHz Slot 1 processor while socket 1 processors were still in the day dreaming phase.

Today’s processor technology is the result of years of innovative thinking put to action. For instance, Intel’s microprocessor architecture has proven that we’ve taken the first steps into an era where computers are capable of doing far more than just calculating a few spread sheets or playing video games.

There is a lot more unlocked potential from Intel and if you love your Quad-Core i7, then you’re going to love this! How about a 6-core Intel Core i7-980XE Gulftown 32nm Processor? That’s right! We’ve got Hexa-Core!

Where to begin.Well, let’s start with the obvious differences between all the Core i7 processors in Intel’s arsenal. This helpful little graph is far easier to read than endless text. 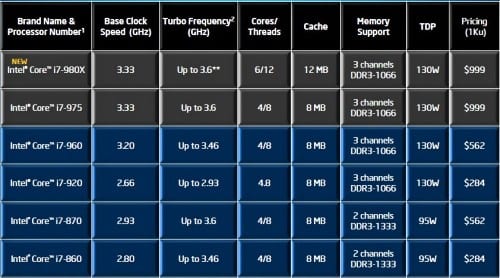 One feature design that makes the 6-Core Gulftown an impressive revoluationary processor is power consumption. To put it into perspective, AMD’s first revision Phenom II X4 965 processor consumes 140 Watts TDP (125 Watts in recent revisions). The Core i7 920 to 975XE processors carry a max 130 Watts TDP and that includes the new 6-Core Gulftown. That’s extremely impressive given that it powers 2 extra cores flexing 4 HyperThreads.

The 6-Core Gulftown is a 32nm processor that shares a couple important features with the 45nm Core i5/i7 Lynnfield and 32nm Core i3/i5 Clarkdale; a 2-core processor with hyper-threading that makes it perform like a quad core.

Other similarities include Intel Turbo Boost Tech which dynamically overclocks the processor frequency when needed, Overclocking Enabling, and Integrated Memory Controllers. But again, it’ll be a lot easier if we just show you. 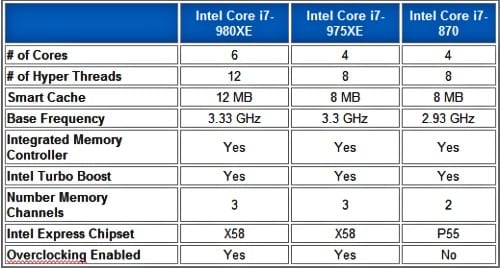 Power users say that you can never have too much L3 Cache, or in this case, Smart Cache. This next generation Xtreme Edition processor carries a whopping 12 MB Smart Cache. That’s 10 MB more cache than a couple generations ago when we thought 2MBs was enough.

Now, a lot of folks have still been getting the features Intel Turbo Boost and Intel SpeedStep confused. The two are not the same thing and have completely different purposes. Intel Turbo Boost is a feature built in to Core i3, i5, and i7 processors that automatically overclocks the CPU frequency when you’re using an application that requires all or just one of the cores. 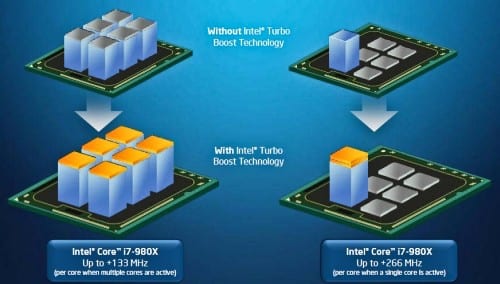 For instance, many games are still single threaded and will utilize only one CPU core even if your proessor has four. Turbo Boost will overclock just one core by a few hundred MHz to aid the application when needed. That’s why the Core i5 661 Clarkdale does so well in many game titles like Crysis, because the game only uses only one core. 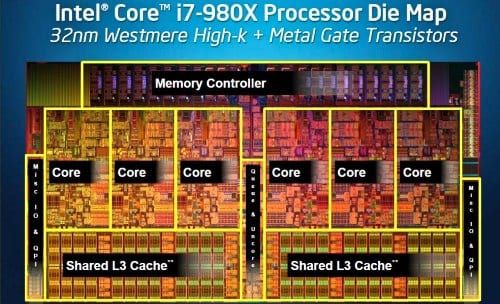 Like the Bloomfield processor, Gulftown’s memory controller accesses three DDR3 memory sticks at once, called Triple Channel. The memory controller makes sure there is ample memory bandwidth readily available for each core when it requires it. The average memory bandwidth is somewhere in the neighborhood of 25 GB/s using Triple Channel 1066MHz DDR3 memory. That’s a lot more than the Penryn generation’s 6.5 GB/s with the memory controller that was integrated within the chipset. One can easily imagine what 1800MHz DDR3 memory would offer Gulftown platform. That’s a lot of “Farmville”.