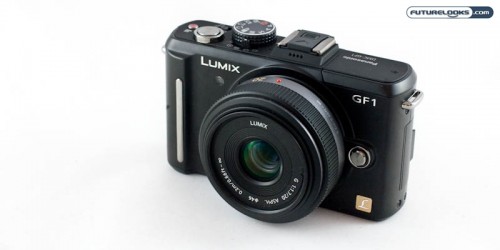 To be honest, when Micro Four Thirds format was announced, I couldn’t really see the point. Sure, the cameras were slightly smaller but not by much. If you look at older Micro Four Thirds cameras like the Panasonic G1 and GH1, they’re smaller than something like a Canon Rebel but not by a serious amount. You still can’t fit them comfortably inside a jacket pocket and you’re missing some comforts we are used to on a traditional DSLR, not to mention the fact that introducing a whole new camera system means people have to purchase a whole new set of lenses. However, the most recent batch of m-4/3rds bodies have been sleeker, more attractive and more fully featured in comparison, showing that the format is evolving into something that is if not a competitor to the old guards of Canon and Nikon, then definitely a niche alternative with a legitimate market share.

Panasonic has little history in the SLR market, with only two entries using the standard 4/3rds format, neither of which was very successful. However, along with Olympics, they are spearheading the Micro Four Thirds format, a design that allows for much more compact cameras by relying on digital-only principles. m-4/3rds cameras don’t have a mirror or a prism to reflect light to a traditional viewfinder. Instead, the LCD on the back reads directly from the image sensor like on most compact digital cameras, allowing the m-4/3rds cameras to be almost 50% slimmer than a “normal” DSLR bodies. This begs the question of why other camera manufacturers don’t just do away with the mirrors and pentaprisms in order to reduce body size, weight and probably production cost but keep in mind that unlike Canon, Nikon, Pentax, etc, Panasonic does not have an existing legacy system that they have to be concerned with for compatibility.

Make no mistake, though…mirrorless formats like m-4/3rds are the future of photography and I wouldn’t be surprised to see other companies adopt similar design philosophies as digital cameras further distance themselves from their film roots. 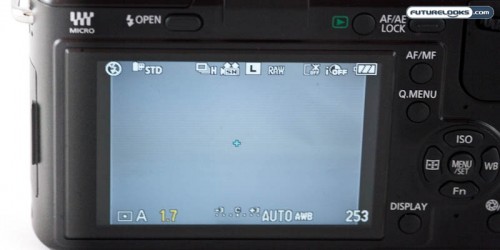 On the back, you’ll find a 3.0″ LCD surrounded by a multitude of buttons for each one of the camera’s functions. For some that are used to simple consumer compact cameras, this may look a little overwhelming at first. Unfortunately, the LCD is only a 460,000 dot so it is slightly noticeably less detailed than those featuring 920,000. And you’ll be using that LCD a lot because as mentioned, there is no traditional viewfinder on the GF1. If you simply cannot frame properly using live view and you must have a viewfinder, there is an electronic one available that plugs into the flash hotshoe of the camera. I wasn’t provided with one so I won’t be going into that in detail. 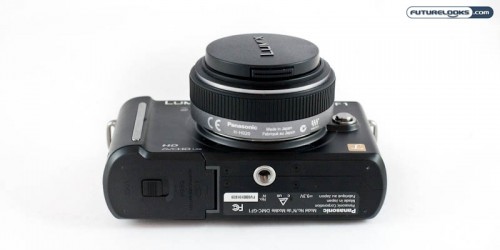 One thing obviously missing from the GF1 is in-body image stabilization, something we have come to expect from most new camera systems. This is not something exclusive to the m-4/3rd’s cameras as the Olympus EP1 has image stabilization in the body. This reduces cost on lenses and makes stabilization slightly more reliable so it is disappointing to not see it on the GF1.

Other notable features include a movie mode that shoots 720p HD video, HDMI output and smart facial-recognition focus. As for tripod mounts, all standard thread tripods will fit the GF1.

The Panasonic GF1 retails for about $549.95US for the body only or you can pick it up with the aforementioned and popular pancake lens, the 20mm f/1.7 for about $725US. An alternative 14-45mm kit is also available for $699.95US. Of course a large number of GF1 specific accessories are also available. 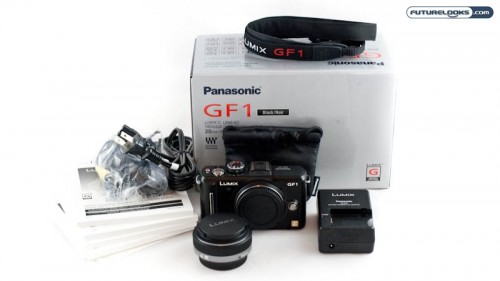 Along with the camera, you’ll find an included battery charger, AV cables to connect the camera to a TV, software CDs, a camera strap and a pouch for the included 20mm f1.7 pancake lens. Like most cameras these days, there is no included storage card as if Panasonic included one large enough to hold a significant number of 12MP images, the cost would increase quite a bit.

The GF1 uses SD card storage and you’ll probably want to invest in a big one (or better yet, several medium sized cards) as full-sized JPEGs are roughly 5-6MB each and RAW files are in the 15MB range.