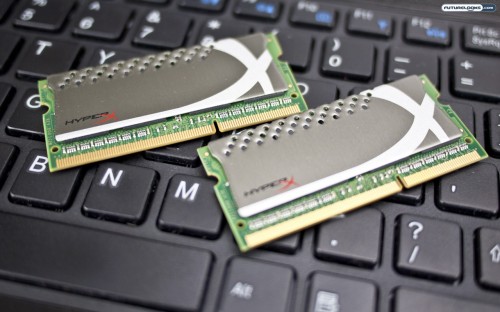 Last year I had an opportunity to review a unique product from Kingston called HyperX PnP which are memory modules designed for use in Sandy Bridge and newer INTEL notebooks. They allow the system to run at higher than stock memory speeds, which benefit the integrated INTEL graphics on the CPU core without having to mess with BIOS settings or install any potentially unstable utilities. Unlike desktop computers which give you full control of this in their BIOS, notebooks are significantly limited in the control one has in the BIOS settings. The HyperX PnP modules are designed to run at these speeds with special programming right on the modules themselves.

Because of our review, a few of our readers ended up purchasing these modules so they too could get both a memory and performance boost at the same time. One of those readers had some issues with getting the pre-programmed overclock out of the modules, but there were some peculiar things about them. Could they be counterfeit?

They Didn’t Work At The Rated Speeds

Our reader didn’t have any luck with getting the modules to run at the rated speeds, which in his case, was 1866MHz (HyperX PnP comes in 1866MHz and 1600MHz). They defaulted to 1333MHz and stayed that way. Even though his system met all the criteria set out by Kingston for the HyperX PnP modules to work which included a Sandy Bridge processor with integrated graphics onboard, they would not work at the PnP speeds. I thought that this might have to do with the fact that he had all four slots filled, but even with a single pair, he could not get the rated speed.

I also thought that perhaps running at 1866MHz might be the issue as I was told that the kit was not supported at 1866MHz with all four slots filled. But it didn’t explain why it wouldn’t run at that speed in a single pair.

Eventually, he found out through a support thread on the ASUS forum that they might have locked the memory multiplier in the latest BIOS for his notebook which was an n53sv. There was no way to flash it back. This notebook had a Core i7 processor and an HM65 chipset which 100% meets the criteria for HyperX PnP. But that still sounded fishy because why would they do that? Then came something we didn’t expect to see…

All HyperX Modules Use Metal Heatsinks…Right?

For as long as most of us can remember, HyperX modules from Kingston come with some sort of metal heatsink onboard. When we asked our reader to post pictures of the modules and the UPC label, we were shocked at what we saw… 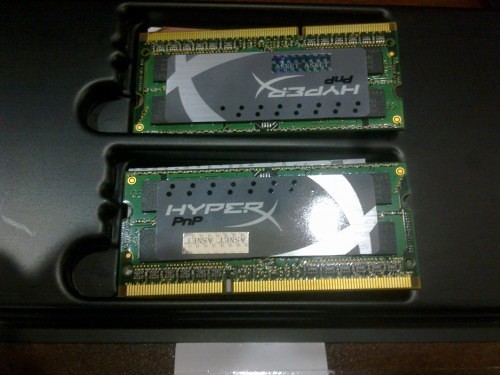 The special HyperX heatsink is what gives the HyperX series modules its signature look. The HyperX PnP modules we reviewed were definitely not stickered up like the ones sent in by our reader. The stickers looked fake and even cheap compared to the high quality metal heatsink that we thought should be on the modules. It left many of us scratching our heads when the pictures were posted in the comment area of the original review.

In this shot above you can see very clearly that those are not HyperX metal heat spreaders. They look down right fishy. In fact, there was only a sticker on one side. Then there was this “ASNET” sticker on the modules. If they were authentic Kingston modules, shouldn’t they have a Kingston sticker on them? And most importantly, who is this ASNET?

Getting to the Bottom of This…

With this information in hand, we asked our poor reader to contact the place he purchased them from, and also the area rep from Kingston. We also contacted our peeps at Kingston down in Fountain Valley, USA, to see if we could shed some light on this situation. All the signs pointed to counterfeiting, which can happen in some remote markets, and these are things that Kingston obviously wants to know about.

We all know that if the price is too good, it’s probably best to stay away, but since pricing varies from country to country, it’s really hard to say what a good price would be in his local market. However, one thing that is sure is if you bought from a reputable retailer, you’ll be taken care of. The ASNET sticker on the modules definitely didn’t sound right to us. Why would they have extra stickers if they were sealed at the factory? We Googled and there was no such retailer/etailer with this name. The plot thickens…

The Good News and the Bad News

The good news was that the memory modules were indeed authentic. Yes. We know. We couldn’t believe it either! But it turns out there was a very simple explanation. 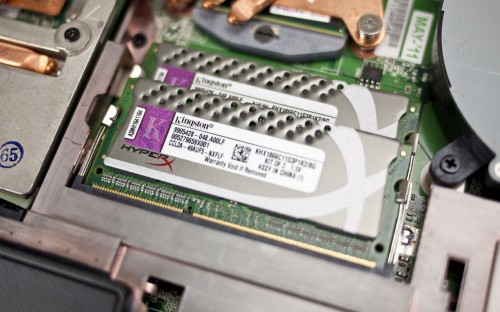 What Kingston found out after the first batches went out was that in some cases, due to the tight confines of the notebook chassis, the heat spreaders would make the modules too thick to fit properly. This would cause clearance issues and in some cases, prevent the second module from locking down properly into the DIMM slots. This as you might have guessed, can cause all sorts of issues. In order to correct this, Kingston went ahead and changed the heat spreaders to a sticker that still gave that HyperX look. This is what threw us off because we’ve never known a HyperX modules to not have a metal heatsink, and the samples we had, were clearly using metal ones on both sides. This sticker only covered one side in these new revisions. And who was ASNET? They were apparently the distributor in that part of the world so they would not have a storefront as a wholesaler/distributor.

But in the end, the answer was really simple. Kingston made a change to ensure that their modules were 100% compatible with all the notebooks out there and this change didn’t seem to affect performance as they are still one for the fastest modules out there for compatible notebooks. The change just wasn’t communicated very well and that’s probably why everyone was a bit concerned. This is a good thing because it shows that Kingston does care. So what’s the bad news?

Well it turns out that the issue with the BIOS lockdown on our reader’s ASUS notebook was indeed what was causing the issue, whether he used two modules or four modules. While he’ll still get the benefit of all the extra memory he purchased, he will not get the performance benefit he would have gotten had they been able to run at full speed.

The Lesson of the Day

So what we learned from this experience is…

We’re definitely happy that this didn’t turn into a huge “Kingston-Gate” situation. We know that Kingston really cares about its customers and we were very pleased to see just how quickly the entire Kingston global network combined to figure out this odd situation. If you or anyone you know runs into a sketchy situation, don’t hesitate to report it. Kingston makes it really easy and you’ll be helping out your fellow enthusiasts as well. This goes for not only memory modules, but SSDs and anything else that just doesn’t look “quite right”.