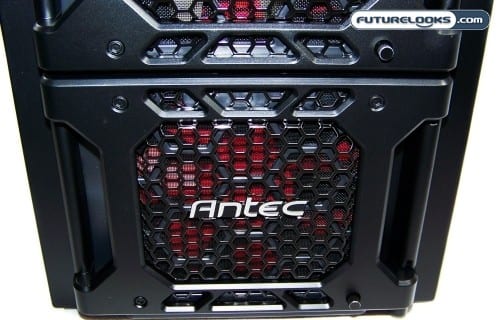 We all know Antec from the many computer enclosures that they’ve put out over the years. Words like cable management, great thermals, and phrases like “man, I love that case!” are often associated their products. They used to love designing clean, sharp, and highly refined enclosures. That was until some of their engineers found themselves exploring the deepest recesses of space and returned with the new Antec Dark Fleet series enclosures. Let’s take a closer look at the fleet admiral in the line up, the Antec DF-85 enclosure. 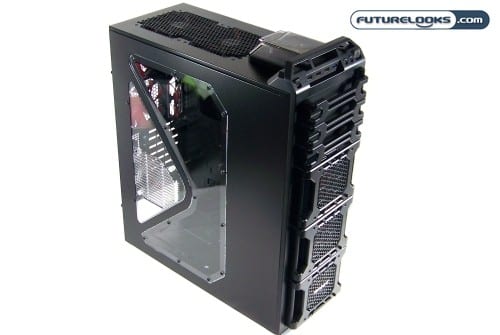 If you loved the features of the Antec Twelve Hundred, then you’ll really like some of the new features found in this chassis. For starters, the biggest innovation is something called Fleet-Release. These are access doors on the front bezel that allow you to service your fans and wash filters as needed.

The DF-85 offers three other new features which include changeable 4 x 3.5″ Fleet-Swap bays, 1 x internal bottom mounted SSD drive tray, and 1 x external top 2.5″ hot swap SATA drive bay. And, there’s also a USB 3.0 compatible port built in to the front panel. The CPU cutout in the motherboard tray returns, as well as the bottom mounted PSU bay supporting any size PSU including their very own CP series. Of course, plenty of  rubberized grommets to help silence what you put in the DF-85.

Other features include a total of seven cooling fans. There’s 2 x 140mm top, 2 x 120mm rear, and 3 x 120mm front TwoCool red LED fans. Antec uses really good fans, so this should provide more than enough cooling. Cable management seems spot on and lockable access doors make it hard for sneaky hands to get at your precious components. Many of these doors and parts are also completely removable and the plastic used is easily paintable offering modders an easy tapestry to create with.

For those of you into more specifications and details, you can find them on the product home page. The Antec Dark Fleet DF-85 retails for $189.99 US or less. 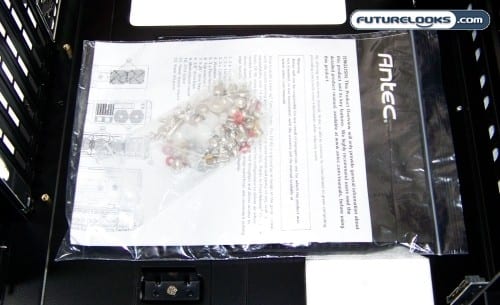 Even though the DF-85 looks a lot like the Performance Series Twelve Hundred enclosure, it actually has a much simpler interior design which means far fewer parts needed for assembly. The DF-85’s case bundle comes in a single zip lock bag along with the chassis manual. It includes a few screws, standoffs, washers, and a few ties to help manage wires. The enclosure already has a few black slip-zip ties attached to the back of the motherboard tray where you’re going to stuff wires.

So, really, the case just needs minimal rummaging of the accessories bag to get started. 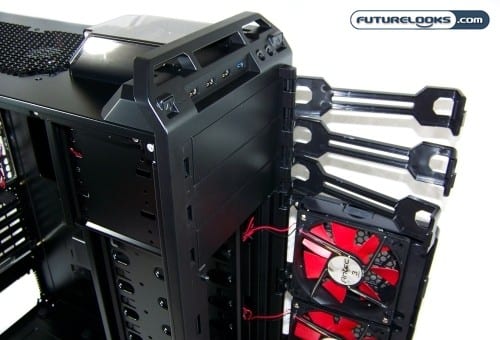 To be honest, the Dark Fleet series is a little wild for Antec. The DF-85 looks very similar to their Twelve Hundred in stature but leaves behind the clean appearance of the Performance Series. Locking Fleet Release bezel doors help secure more than just the doors in the case of the Dark Fleet DF-85.

As you can see, it’s a whole new facade with Fleet Release doors featuring the removable fan filters and variable knob controlled red bladed 120mm LED fans. That should come in handy keeping the dust out of your case and off your hard drives. The top doors don’t use them since the optical drives fill in the space and have solid face plates. To open these doors and access your drives, you have to first unlock the doors from the inside. That should keep your drives more secure from prying hands. 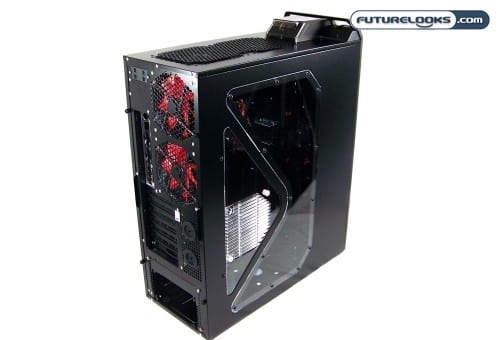 The right side panel features a window very similar to the Antec Twelve Hundred with venting for an optional 120mm cooling fan. It only takes two screws to mount said optional fan. Personally, I would rather see a fan there by default for better cooling for your video card. You’ll see why it would help cooling and noise later on in testing.