Since we’re only testing for cooling performance, OCCT Linpack high priority was used to potentially melt down the processor. This test was allowed to run for 2 long monotonous hours. Yep, that’s 12 hours total of redundant cooking and baking of my beloved Core i7-980XE processor. Let me say up front that every one of these impressive coolers survived, but some clearly rose to the top. 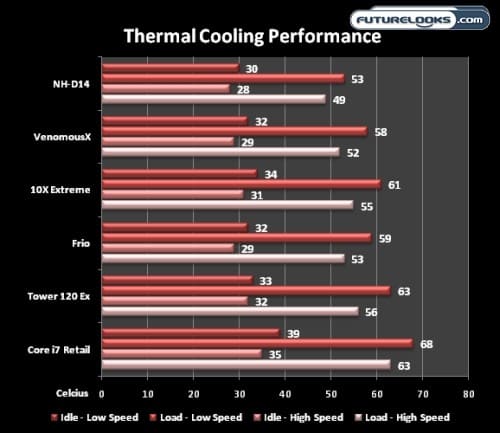 I can’t say I’m surprised to see the Noctua NH-D14 leading the pack thanks to its dual radiators and unique 120mm/140mm fan combination. The only place were there is little difference is idle temperatures. Really, this is just the natural laws at work and not a problem with any of the coolers. What is most important is how the coolers perform when it’s time to go full throttle.

When a CPU is crunching away, it’s not uncommon for the fans to gradually spin up especially when you’re letting the BIOS manage the temps. Thus, I included the average fan noise experienced when using the BIOS to manage temps whilst running some BFBC 2, desktop writing, and SANDRA CPU benchmarks. 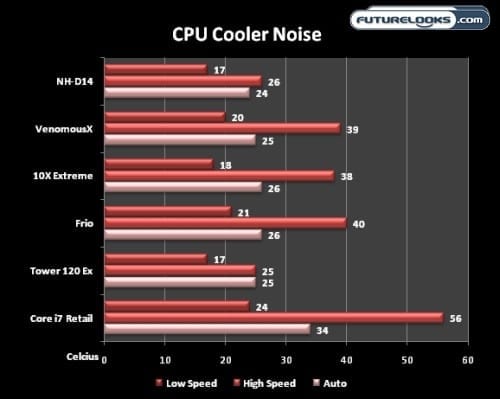 As you can see, the NH-D14 is a pleasant soft lullaby compared to the others with the exception of the Tuniq. However, the Tuniq’s low noise comes at a price with higher temperatures. Overall, the Noctua is fantastic on the ears and would work very, very well for A/V users who need near silent performance. What’s even better is the fact that the Noctua NH-D14 can go lower without giving up much performance. 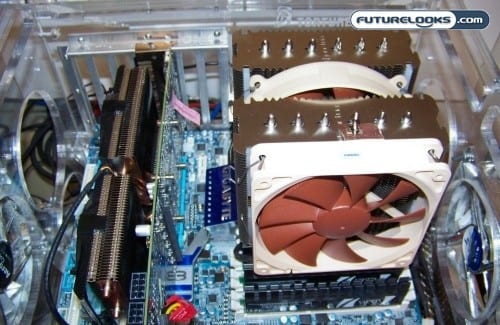 What can we say that you’ve no doubt already figured out on your own? The Noctua NH-D14 is indeed the best performing CPU cooler money can buy. It’s even more impressive that the money isn’t an amount that will cripple you. The fact that it includes completely everything you need to install it makes it somewhat of a bargain. To further add to that value proposition, it’s also one of the largest on the planet so you get plenty of cooler for the money. But therein lies the trade off as it can limit your installation options.

While the two dual radiators make you more careful when selecting this cooler as you’ll need to make some measurements, it’s also the key to being able to dissipate more heat using a unique balance between a larger 140mm fan in the middle and a smaller 120mm fan at the front. Both of which are dead quiet thanks to Noctua’s design. In the end you get a massive, yet very quiet CPU cooler that all but guarantees your computer will be running cooler than you  in the Summer heat.

What you may not know is that the ND-D14 currently holds the highest overclocking record set by UnknownTeam.cl out of Chile. The cooler made it possible to achieve a 5372MHz frequency using an Intel Core i5-655K unlocked processor. That’s pretty freaking impressive for an air cooler to say the least. It’s also impressive to think that for $89.99US you’re giving water cooling a run for its money and you’ve got the same cooler that elite overclockers are using. It’s definitely a product in a league of its own and that’s why it earns our very hard to earn “Editors’ Choice Award”.