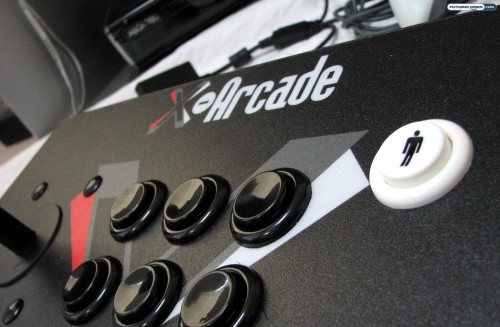 Outside of Japan and certain gaming championships, the very concept of the “arcade” is practically dead. Even so, we still want to have that arcade-like experience at home and a big part of that is having the right equipment. The new X-Arcade Solo Joystick addresses that very need, calling itself the “ultimate universal arcade joystick.” I can smell the bad body odor and feel the sticky floors under my shoes already.

Bringing the Arcade to Your Living Room

In case you haven’t already figured it out, this arcade stick is an absolute beast. Instead of using cheap plastics, the X-Arcade Solo boasts eight pounds of industrial-grade materials. The idea is that you’ll feel like you’re using a real arcade machine. We did a special video just for you to show how monstrous this thing is.

The retail packaging is comparatively flimsy and uninspiring, but the contents are truly impressive. The extra thick and heavy materials really give you a sense of quality, making the X-Arcade Solo a great way to enjoy games like Super Street Fighter IV. It’d be great for those Xbox Live Arcade titles too.

Features and Highlights at a Glance 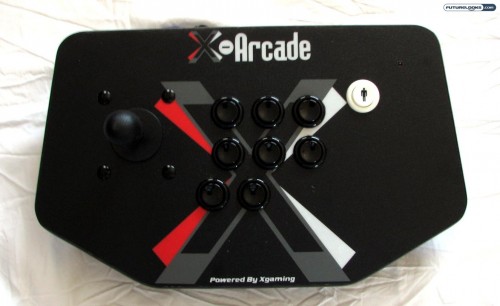 As you can imagine, the X-Arcade Solo offers a wholly different experience from something like the Evil Controllers mod or anything of that sort. The idea is that it’s supposed to mimic the real arcade experience. By and large, X-Gaming has achieved that goal. They’ve used arcade quality parts throughout the construction of this product, feeling like you’ve ripped it straight out of a Street Fighter cabinet. The buttons are of the concave type, which is typical of North American arcade machines. The textured surface is a nice touch too.

The joystick, which is now aligned with the second row of buttons, really does resemble the Street Fighter machines of old. There are eight action buttons on the face, arranged in three rows, along with the start button. You’ll also find two modifier buttons on either side, plus one more programming button in the rear.

You’ll notice that there is no Xbox button or PlayStation button on the X-Arcade Solo. This makes it much less convenient to access the Xbox Menu, for instance, when you’re in the middle of a game. It would have been nice if one of the buttons was programmed to serve this purpose. Since there is only one joystick, you also won’t be able to use the X-Arcade for anything that would require both analog sticks.

For the Xbox 360, you hold one of the side buttons and press the appropriate face button to switch between d-pad, left analog stick, and right analog stick control.