There are a few minor updates to the testing system this go around thanks to our friends at be quiet!. They’ll be supplying our cooling solution so we can confidently push our system. We will still be including the GIGABYTE GA-990FXA-UD7 + AMD FX-8350 as a base line comparison, with all other parts in the system being kept the same.

While we are still not using the latest APU, this board is the top-tier flagship for FM2+ socket boards by GIGABYTE. The G1.Sniper A88X is easily amongst the best you can by for the AMD APU lineup and we will see if that title is warranted or a little over zealous. We will also find out of a premium board like this can close the gap on the very dated, yet more expensive (and more powerful) 990FXA-UD7. 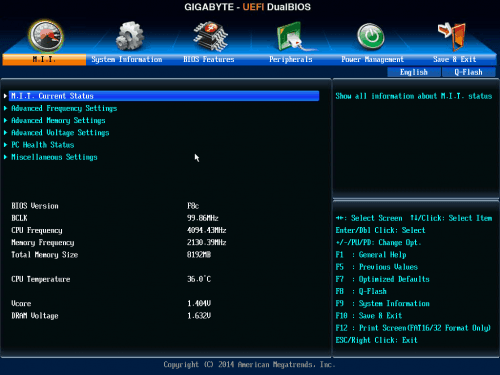 With the GIGABYTE G1. Sniper A88X installed, we get a look at the UEFI BIOS for all the tweaking options we have available. The BIOS is AMI based and doesn’t waste time with pointless graphical interfaces, animated backgrounds, etc. The BIOS is a tool and just needs to work and that is what you get here from GIGABYTE. Everything is neat, clean, clearly explained, and each option is where you would expect it. It is also nice to have some extras such as Q-Flash and the ability to take screenshots. 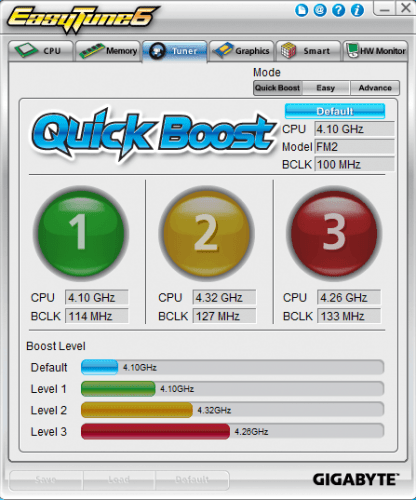 Once we got everything set, we completed installing Windows 7 Ultimate and moved on to the included software. You are already familiar with most of the included software, so we will cover some of the highlights starting with EasyTune 6. We think EasyTune needs more focus at this stage. It has been around for a while but does little beyond the usual safe overclock settings (all worked flawlessly), providing information, and fan control. It does offer the option to overclock the graphics card, but doesn’t even identify the card beyond two clock speeds. I think this part was designed with an on-die GPU in mind and overlooks discrete GPUs.

What we would like to see from EasyTune is what we have seen from other manufacturers, or even GIGABYTE themselves, with more unified software like in their INTEL platforms. Presets for power management, preset fan configurations, and integration of other now standard features such as @BIOS already come standard on those platforms, so we were hoping we’d see it here too. Hopefully we see those changes as an update for all users soon. 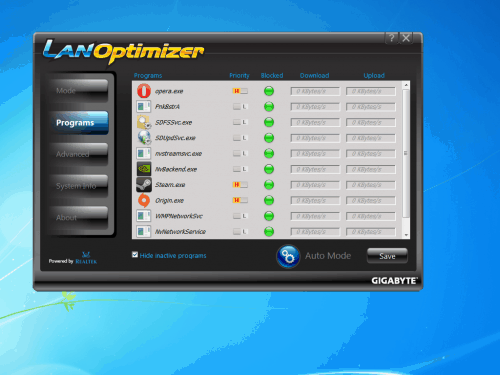 The GIGABYTE G1.Sniper A88X gives you two options for LAN management, but only one seemed to work. First we tried the cFos software which actively monitors and optimizes your LAN throughput and latency. cFos being installed or not didn’t seem to provide any real world performance improvements. We are also a little unclear as to what cFos is doing, so testing if it was doing it well or not didn’t seem plausible. We will get more details and get back to you on this once we spend more time with it.

Then we tested the LAN optimizer which is less sophisticated, but it is also easy to see network performance change. This software allows you control over network prioritization instead of the FIFO default policy. It comes with 4 customizable presets for Gaming, Streaming, Internet browsing, and your own personal setup. Simple but effective, though we did find the throttled download speeds annoying when you forget to change the settings.

The performance of a PC can change based on a number of different things. Thankfully PCMark 8 allows us to test a large number of these different situations all at once to give us a good idea of what we would expect in the real world. This time we are putting the GIGABYTE G1.Sniper A88X through its paces to see how it will perform when you are not playing AAA games. 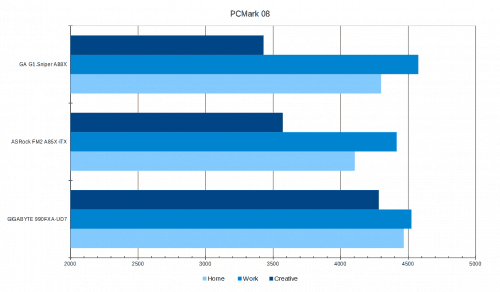 The GIGABYTE G1.Sniper A88X has a solid showing here with some good things to show off. First we do see the G1.Sniper A88X fall behind in Creative testing with a 3430 score, and the ASRock coming in above it with a 3571. This is completely the opposite in the Work test with the G1.Sniper A88X coming out on top with a 4575. Then it comes in the middle of the final “Home” test. This seems like business as usual so lets move into what you can expect from those AAA games.

Let’s see what the gaming benchmarks say next!