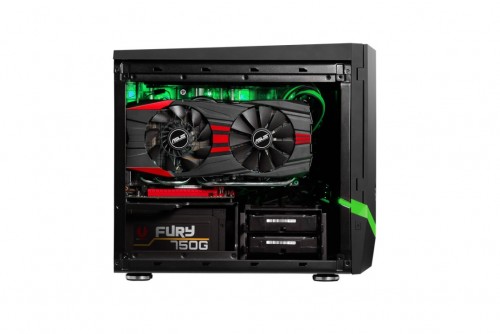 It would seem that BitFenix is determined to expand the number of options and level of innovation in SFF (Small Form Factor) case design. And they’ve seemingly done this almost single handedly. First we had the BitFenix Prodigy, then we had the BitFenix Phenom, and now we have the miniaturized version of their original signature full tower, the Colossus. Introducing, the Colossus Mini-ITX and Micro-ATX cases.

Although they both support different form factors, the Colossus Micro-ATX and Colossus Mini-ITX don’t differ in size. Both will feature the same FlexCage design and SofTouch Surface treatment that is a signature of BitFenix case today. But where it starts to pull from its original design roots is with the LiteTrak light system. The LiteTrak allows the case to appear to have a continuous streak of light wrapping around the case with three selectable colors (red, blue, and green). You can also pulsate and/or alternate the light color. This is a direct nod in the direction of the original Colossus full-tower and the light show it brought to the world when it was launched.

Other differences exist between the two Colossus M Series cases. For example, the Colossus Mini-ITX allows for more space for liquid cooling and ventilation. It is the option you want if you need more extreme cooling while the Micro-ATX design allows for more flexible motherboard selection and the ability to employ more powerful multi-GPU CrossFire or SLI setups. They would certainly go great with MSI’s new GAMING ITX line of components.

In many ways the BitFenix Colossus M Series is an evolution of the Prodigy, but with a redesign that allows for better component compatibility. The Colossus M Series has room for up to 5 fans, high-end graphics cards, or a large array of 3.5″ HDDs. Both cases will be available sometimes this month (December 2013) and sources across the pond say 89 – 99 Euro so our guess is probably in the $100 – $109 US range.

Check out the video below featuring our friend Jacky from BitFenix (check out the Prodigy Build we did with him), run through the new case. Full press release and additional photos are right below it.

November 21, 2013 – Today, BitFenix presents two members of the new Colossus M Series: Colossus Mini-ITX and Colossus Micro-ATX. They are the latest creations from the BitFenix Design Lab, a continuation of the original Colossus line that delivers a premium compact housing with a futuristic yet clean style.

The Future is Bright

One look at this chassis makes it instantly recognizable as a member of the Colossus line. The bold lines and angles create an unmistakably futuristic look that’s tempered by our signature luxurious SofTouch™ Surface Treatment.

Immediately catching the eye is the BitFenix LiteTrak™ lighting system, which enables a continuous streak of light that wraps around the front and sides of the case. Users will be able to not only select between red, blue, and green lighting, but also choose a pulse mode that cycles through each color while adding a pulsing effect – all with a simple push of a button. Best of all, LiteTrak is powered by a single SATA power connection from the front panel – no side panel power connections required!

The ODD bay and mesh ventilated front panel is cleverly concealed by the front door, and the I/O panel, which includes two SuperSpeed USB 3.0 ports, is located on the side panel to maintain a clean look at all times.

The spacious interior offers two pre-installed 120 mm front and rear fans, and includes the option to install up to five 120 mm fans for extra cooling boost. Up to five 3.5″ drives or seven 2.5″ drives in total can be installed, or for those looking to run high-end graphics cards up to 330 mm, the 3 bay FlexCage™ can be easily removed. Colossus Mini-ITX supports installation of thick 240 mm radiators on the top or front, and the easily removable bottom dust filter prevents from dust accumulating dust inside the case over time. Colossus Mini-ITX is the perfect choice for enthusiasts who are looking for compact stylish case with excellent water cooling support and massive storage options.

Colossus Micro-ATX adds Micro-ATX motherboard compatibility, which means added expansion possibilities. The included bottom fan can be easily replaced with up to two 3.5″ hard drives, and with the included removable storage rack, an additional two 3.5″ HDDs or three 2.5″ SSDs can be installed for excellent flexibility. The included magnetic heat shield prevents warm exhaust from the PSU from re-entering the case, and also looks great with its uniquely micro-textured surface. Users can also opt to install a single graphics card and a slim 240 mm water cooling radiator at the same time. Users who require added PCI-express expansion are going to love Colossus Micro-ATX.

BitFenix Colossus Mini-ITX and Colossus Micro-ATX will be available on store shelves in December.

For more information on the Colossus M Series, please click below: